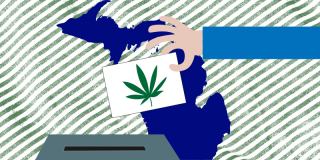 Ever since Election Night 2012 once it was clear that voters in Colorado and Washington were eager to pioneer a new approach, my thinking about marijuana reform always gravitates back to Supreme Court Justice Louis Brandeis famous description of the virtues of federalism in terms of a state being able to, "if its citizens choose, serve as a laboratory; and try novel social and economic experiments without risk to the rest of the country."  Part of serving as an effectively "laboratory" in this context, of course, is having result from a "novel social and economic experiments" that other states can seek to learn from.

The point of this post prelude is to compliment a big new series of articles in the Detroit Free Press a few months before Michigan voters will be asked to decide whether to embrace full marijuana legalization in the state.  The lead article in this series, the first of those linked below, sets up the start of its learn and compare coverage with this note: "With Michigan having nearly double the population of Colorado — 9.9 million to 5.6 million — and an already well-established market of 289,205 medical marijuana cardholders, both supporters and opponents of legalizing marijuana wonder (and worry) whether Michigan is on the same path as Colorado."

What Michigan needs to learn from Colorado's legalized marijuana

5 things I found surprising about legal marijuana in Colorado

I recommend all the pieces in this series, but the "5 surprising things" piece has these not-so-surprising questions from a reporter after a Denver visit (click through for the "answers" though I have reprinted the final one)

Where are the baggies?

Where, oh where, is the outrage or the joy?

Marijuana has become second nature for Colorado: Everyone seems kind of blasé about the proliferation of pot in the state. No one seems particularly up in arms about the legalization or overjoyed by the success of the business. The state bureaucrats say it’s too early to say whether the presence of legal weed is a nightmare or a boon for the state’s economy and the police say there’s not much difference — and not much of a spike in crashes — between a driver impaired by booze or one high on marijuana. The businesspeople are happy with their still relatively new industry, but plagued by the uncertainty of how marijuana is treated by the federal government.