"Guns N’ Ganja: How Federalism Criminalizes the Lawful Use of Marijuana" 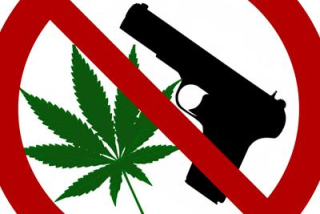 Federalism is a vital tenet of our Republic.  Although federal law is the supreme law of the land, our Constitution recognizes the integral role that state law plays in the national scheme.  Like any pharmaceutical drug that withstands rounds of clinical testing, state law functions as a laboratory in which Congress can evaluate and potentially adopt novel policies on a nation-wide basis.  Most of the time, federal and state law exist harmoniously, complementing one another; other times, however, the two systems clash, striking a dissonant chord.

In the United States, state marijuana laws are currently on a crash course with federal marijuana law, exemplifying the discordant consequences our dual-system of laws sometimes generates.  Eight states and the District of Columbia have legalized recreational marijuana use, yet under the Controlled Substances Act (“CSA”) marijuana remains illegal in the eyes of federal law. Mere confusion concerning the legality of marijuana is not the only consequence, however.  One notable casualty ensuing from the battle of the mutually exclusive federal and state marijuana laws is the deprivation of rights belonging to the unsuspecting, average citizen.

The CSA establishes a schedule of drugs, and various federal regimes — such as entitlement programs and welfare benefits — impose compliance with the CSA as a necessary antecedent for conferral of those benefits.  For example, although possessing a firearm is a fundamental right under the Second Amendment, citizens who wish to lawfully smoke marijuana can no longer avail themselves of this fundamental right. Section 922(g)(3) of the Gun Control Act prevents users of Schedule I drugs pursuant to the CSA — irrespective of state law — from possessing or owning a firearm. Marijuana, despite its lack of potential for addiction, plethora of medical benefits, and disconnect from violence, has always been a Schedule I drug — essentially deemed more addictive and dangerous than methamphetamine, a Schedule II drug. Unknowing, ordinary citizens are consequently caught in this legal black hole, contemplating how conduct can be both lawful and unlawful.

This Article proposes a simple solution to a complex problem: deschedule marijuana.  The Article first surveys the past, observing that the Nixon Administration’s placement of marijuana in Schedule I rang of racial undertones, and then examines the present, noting the majority of states that have legalized medicinal marijuana and the numerous anecdotal reports of its alleviating properties.  Further, enforcing § 922(g)(3) against individuals who consume marijuana lawfully pursuant to state law simultaneously overreaches and under-reaches, failing to target the violent criminals that Congress initially sought to apprehend.  Thus, the federal government’s insistence on maintaining marijuana in Schedule I undermines principles of federalism and prevents law-abiding citizens from fully exercising their constitutional right to own a firearm.