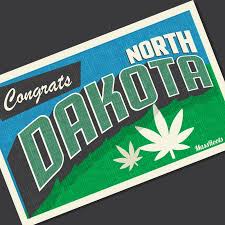 The question in the title of this post is prompted by this interesting recent posting at Marijuana Moment titled "How North Dakota Could Fully Legalize Marijuana In November. Here are excerpts:

Under an effort that has so far gone mostly unnoticed by drug policy reform observers across the country, North Dakota voters could have the chance to approve a ballot initiative in November that would fully legalize marijuana and create a pathway to exonerations for those with past cannabis convictions.

Just two years ago, North Dakota voters passed a medical marijuana legalization measure with 64 percent support.  But the program’s rollout hasn’t been smooth — leaving prospective patients without access to dispensaries and barred from home cultivation — and so a small team of anti-prohibition organizers at Legalize ND decided to write a new initiative to help patients and adults consume and grow cannabis freely.

The organization hasn’t received financial backing from national advocacy groups such as the Marijuana Policy Project or the Drug Policy Alliance, Eric Owens Sr., who wrote the initiative, told Marijuana Moment in an interview.  Instead, it’s relied on a steady flow of grassroots support and word-of-mouth to collect signatures in support of the measure.  Owens said Legalize ND has collected more than 16,000 signatures so far, but the group is expecting to turn in about 20,000 to the North Dakota Secretary of State’s office on July 9.

The state requires 13,452 valid signatures from registered voters in order to qualify for the ballot. The signatures must first be verified before the initiative officially qualifies. “We’re thousands over the required amount,” Owens said.  “When people talk about grassroots, this really, legitimately was grassroots. Nobody was there because nobody cared about us in North Dakota.”...

It’s going to be an uphill battle for Legalize ND, which is expecting to face opposition from one of the largest employers in the state, Sanford Health, as well as the highway patrol and the prosecutors association.  That said, internal polling from the organization indicates strong support for the initiative, Owens said.  “We don’t have money to fight them with TV or radio, we’re just going to be common sense and let people know through social media.  The people — plain and simple — they got screwed out of their medical marijuana and they want revenge.”

Though North Dakota might not seem the most likely contender to become one of the next states to fully legalize marijuana, voters elsewhere have already delivered cannabis reform surprises in 2018: Oklahomans approved a measure to legalize medical marijuana [in late June]....

Local political commentator Rob Fort predicted in a column this week that “barring some major problem with the petitions this issue should be on the ballot.”

I still think is was a very big deal that last week voters in deep-red Oklahoma overwhelmingly approved a broad medical marijuana ballot initiative (details here and here). But if voters in deep-red North Dakota were to this year approve a recreational marijuana reform initiative, I suspect that even folks like Jeff Sessions and Kevin Sabet would see the political inevitability of nationwide marijuana reforms.

Of course, with limited funding and significant in-state opposition, I would be inclined to predict that a full ballot initiative would fail in North Dakota. Polls generally show roughly a 50/50 split on support for full legalization among more conservative voters, whereas medical marijuana is usually support 3 to 1 in this group. But I have to think a very thoughtful campaign could stress not only the thwarting of the will of the voters on medical marijuana, but also the coming of full legalization regimes in Canada (which is just a couple of hours drive from just about every major ND city). Perhaps a kind of "Blame Canada" campaign could help carry a full legalization initiative in this unique context.