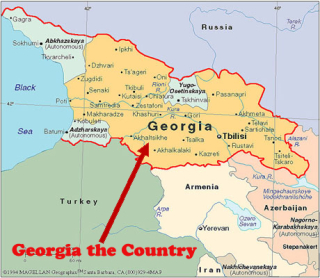 Though I am surely losing something in the translation of Georgian web pages here and here,  I am still sure a ruling by Georgia's Constitutional Court this week is a big deal.  This press report, headlined "Georgian Court Abolishes Fines For Marijuana Consumption," provides these details:

Georgia's Constitutional Court has abolished administrative punishments for the consumption of marijuana, making the Caucasus country the first former Soviet republic to legalize usage of the drug.

The ruling by four senior court judges on July 30 concerns only the consumption of cannabis, while cultivation and selling remain a crime, the court said in its ruling. It added that punishing a person for consuming cannabis would comply with the constitution only if consumption put a third party at risk.

"According to the applicants [Zurab Japaridze and Vakhtang Megrelishvili], the consumption of marijuana is not an act of social threat. In particular, it can only harm the user's health, making that user him/herself responsible for the outcome. The responsibility for such actions does not cause dangerous consequences for the public," the court said.

"The Constitutional Court highlights the imposition of responsibility of marijuana consumption when it creates a threat to third parties. For instance, the court will justify responsibility when marijuana is consumed in educational institutions, public places, such as on public transport, and in the presence of children,” it added....

Japaridze told reporters the ruling was a victory for a freer Georgia. "This wasn't a fight for cannabis.  This was a fight for freedom," he said.

In late November, the Constitutional Court decriminalized use of marijuana or other forms of cannabis-based drugs but preserved administrative punishment, such as a fine, for marijuana use.  Before that, Georgia's Criminal Code defined repetitive use of marijuana and possession of more than 70 grams of dried cannabis as a crime for which individuals could face punishment that does not include imprisonment.

It is striking and somewhat telling that now a former Soviet satellite republic that still shares a border with Russia now has more progressive protections for fee use of marijuana than does the US of A.  One might hope that those who preach freedom in the US would take a lesson from this ruling, but I suspect that few know for sure where Georgia is on the map and fewer still will know it now constitutionally protects the freedom to consume marijuana more than does the US government or its federal courts.