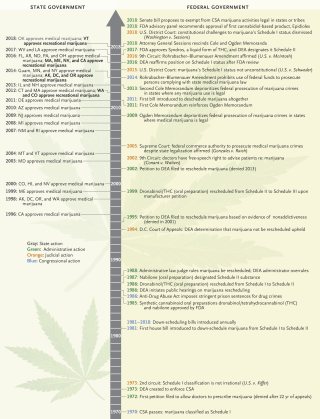 The title of this post is the title of this new Perspectives piece appearing in the The New England Journal of Medicine and authored by Rebecca Haffajee, Robert MacCoun and Michelle Mello. I recommend the piece highly in part because of its terrific graphic under the heading "U.S. Marijuana Policy Milestones, 1970–2018." Here is part of its text:

The present state of conflicting laws seems unstable and suboptimal for rational drug control. Federal regulation that accommodates and reinforces state medical marijuana regulatory regimes would result in a safer, more reliable, more accessible supply of marijuana products. Congress, because it answers to the people and represents the states, appears the most likely branch to move on marijuana policy; it could even be encouraged to act by Canada’s recent legalization of recreational marijuana.  Federal courts are increasingly hearing challenges to marijuana’s Schedule I status but have so far been unwilling to deem Congress’s scheduling determination irrational and therefore unconstitutional.

In Congress, rescheduling marijuana by amending the CSA is one attractive option.  The executive branch, too, can reschedule CSA substances, but the mechanisms are time consuming and unlikely to attract interest within the current administration.  Because considerable evidence now supports marijuana’s therapeutic benefits in reducing chronic pain, nausea, and vomiting in patients with cancer, as well as multiple sclerosis–related muscle spasms, there is a compelling argument that marijuana is more appropriately designated as a Schedule II or Schedule III drug.  Rescheduling would facilitate further study of products for FDA approval, but would not automatically change the severity of penalties for marijuana crimes or alter international treaty obligations, enshrined in the CSA, to ensure that all psychoactive substances are used only for legitimate medical and scientific purposes.

Congress could also remove marijuana from the CSA schedules altogether. This dramatic action could be coupled with legislation authorizing FDA oversight of marijuana products. Whether marijuana’s psychoactive effects preclude this move away from regulation as a controlled substance would provoke considerable debate. Subjecting marijuana products to FDA approval would hinder access initially but ultimately foster a robust system for regulation and research. FDA oversight of marketing would also improve product safety and consistent promotion across states.

The [proposed] legislation [sponsored by Senators Gardner and Warren] represents a third option designed to respect states’ rights — codifying the approach articulated in the Cole Memorandum by amending the CSA to exempt marijuana activities that are lawful in the jurisdiction where they occur. This solution would be more permanent than attorney-general guidance or agreements between states and the attorney general regarding enforcement, which shift with the political winds, and would therefore promote stability for medical users and suppliers. But it would not facilitate research into marijuana harms and benefits, bring products within the FDA’s purview to ensure safety and efficacy, alleviate interstate health risks, or address potential conflicts with international treaty obligations.

We think this third option, which addresses some pressing conflict-of-law concerns such as unpredictable criminal enforcement, is preferable to the current blurred vision of the future of marijuana policy.  Ultimately, a more comprehensive federal regime that perhaps resembles Canada’s recent legalization of recreational marijuana could affirmatively promote health and safety through research and regulation.

Make a world peace, They must be work and decides as one.