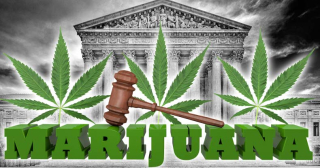 The modern state medical marijuana laws owe part of their structure to critical lower federal court rulings about the First Amendment's protection of doctors who wish to discuss marijuana use with patients.  In the late 1990s after California voters passed the nation's first medical marijuana law, the federal government threatened physicians who recommended or prescribed a Schedule I drug with possible revocation of DEA registration and exclusion from Medicare and Medicaid reimbursements.   But this threat was thwarted through litigation which culminated in a ruling by the U.S. Court of Appeals for the Ninth Circuit holding that physicians’ First Amendment freedom of speech rights under the privileged doctor-patient relationship permitted them to issue medical marijuana recommendations.  The Ninth Circuit's ruling in Conant v. Walters, 309 F.3d 629 (9th Cir. 2002), has provided a key foundation for modern medical marijuana regimes, but the firmness of that foundation could be questioned because the US Supreme Court has never addressed this issue directly.

As of this morning, the Supreme Court still has not addressed this issue directly, but it has now ruled in National Institute of Family and Life Advocates v. Becerra, available here, that the First Amendment limits what states can tell doctors and other health professional to say or not say.  Here is part of a fascinating passage (which even mentions medical marijuana, with my emphasis added) extolling the importance of broad constitutional protections in this realm:

As with other kinds of speech, regulating the content of professionals’ speech “pose[s] the inherent risk that the Government seeks not to advance a legitimate regulatory goal, but to suppress unpopular ideas or information.” Turner Broadcasting, 512 U. S., at 641.  Take medicine, for example. “Doctors help patients make deeply personal decisions, and their candor is crucial.” Wollschlaeger v. Governor of Florida, 848 F.3d 1293, 1328 (CA11 2017) (en banc) (W. Pryor, J. concurring).  Throughout history, governments have “manipulat[ed] the content of doctor-patient discourse” to increase state power and suppress minorities:

“For example, during the Cultural Revolution, Chinese physicians were dispatched to the countryside to convince peasants to use contraception. In the 1930s, the Soviet government expedited completion of a construction project on the Siberian railroad by ordering doctors to both reject requests for medical leave from work and conceal this government order from their patients.  In Nazi Germany, the Third Reich systematically violated the separation between state ideology and medical discourse. German physicians were taught that they owed a higher duty to the ‘health of the Volk’ than to the health of individual patients.  Recently, Nicolae Ceausescu’s strategy to increase the Romanian birth rate included prohibitions against giving advice to patients about the use of birth control devices and disseminating information about the use of condoms as a means of preventing the transmission of AIDS.” Berg, Toward a First Amendment Theory of Doctor-Patient Discourse and the Right To Receive Unbiased Medical Advice, 74 B. U. L. Rev. 201, 201– 202 (1994) (footnotes omitted).

Further, when the government polices the content of professional speech, it can fail to “‘preserve an uninhibited marketplace of ideas in which truth will ultimately prevail.’” McCullen v. Coakley, 573 U. S. ___, ___–___ (2014) (slip op., at 8–9).  Professionals might have a host of good-faith disagreements, both with each other and with the government, on many topics in their respective fields.  Doctors and nurses might disagree about the ethics of assisted suicide or the benefits of medical marijuana; lawyers and marriage counselors might disagree about the prudence of prenuptial agreements or the wisdom of divorce; bankers and accountants might disagree about the amount of money that should be devoted to savings or the benefits of tax reform.  “[T]he best test of truth is the power of the thought to get itself accepted in the competition of the market,” Abrams v. United States, 250 U. S. 616, 630 (1919) (Holmes, J., dissenting), and the people lose when the government is the one deciding which ideas should prevail.

Given the modern politics of marijuana reform, I was not that worried that the Ninth Circuit's work in Conant v. Walters would be undermined anytime soon. But it would not be too hard to imagine Attorney General Jeff Sessions or other state or federal officials resistant to marijuana reform trying to heavily regulate how medical professionals can talk to patients about marijuana. This new SCOTUS precedent would seem to limit such efforts.