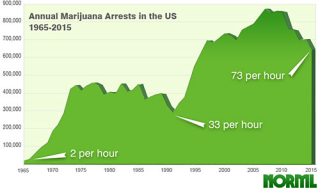 Writing at The Intercept, Tana Ganeva has this notable new article reporting on some notable new data on marijuana arrests under the headline "The War On Pot Marches On: In Nearly Half The Country, Marijuana Arrests Have Gone Up Since 2014." Here are excerpts (with links from the original):

This week, Senate Minority Leader Chuck Schumer, D-N.Y., a politician adept at reading and responding to the public mood, introduced a bill to decriminalize cannabis at the federal level. And in some states, pot is already being taxed and regulated.   Underneath that progress, however, a war is still raging.  New data published here for the first time show that in at least 21 states, more people were arrested in 2016 than in 2014. Meanwhile, thousands of people who were arrested previously for what is now legal in many places continue to languish in prisons.

Jon Gettman, associate professor of criminal justice at Shenandoah University, used data from the FBI’s Uniform Crime Report to put together previously unpublished arrest data, which he provided to The Intercept.  The data show that in at least 21 states, pot arrests went up from 2014 to 2016, even as weed has been legalized and decriminalized in other states and cities.  Complete data were not available for Florida, Illinois, Alabama, and Washington, D.C.

Gettman says the idea that we’ve taken a laxer approach to pot prohibition is not true across the board.  “In some places, arrest rates are not only plugging along, they’re going up,” he told The Intercept.  “The idea that marijuana prohibition is going away is not supported by the data.”

Meanwhile, in states that had legalized or decriminalized pot as of 2016, people were still getting arrested, albeit at lower rates.  Georgia, for instance, has twice the population of Colorado, but arrested more than five times as many people.  In Colorado, which boasts a thriving legal market, 5,771 people were arrested for marijuana in 2014, down from 10,438 in 2012, the year voters legalized it.  That number was lower in 2016, but not by much: 5,098. The overwhelming majority of arrests were for possession.   As NPR reported, these tend to be low-income, young people of color running afoul of the strict regulations imposed in legal markets.

“Marijuana law enforcement becomes a convenient and useful tactic in the implementation of other law enforcement policies,” Gettman said. “You have to ask, ‘What purpose do pot arrests serve the local police?’”

Take New York City.  Pot possession arrests fell from 26,390 in 2014 to 18,120 in 2016, according to data assembled by the Marijuana Arrest Research Project and the Drug Policy Alliance.  Yet police officers continue to target young people of color: Between 2014 and 2016, 86 percent of pot arrests were of blacks and Latinos....

Nationwide, there’s an endless list of factors that might influence pot arrest rates. Do police make a lot of traffic stops?  Do they target certain areas or populations, like people they suspect might be undocumented?  Are they trying to establish authority on the street by busting teenagers?  New York’s stop-and-frisk program, in which police used a loophole to conduct illegal searches of primarily black and brown young people, is a classic example.   The policing of homeless people like Winslow, which happens all over America, is another.

A few other factors drive the arbitrary nature of marijuana arrest rates.   There’s some diversion from states where it’s legal, and the creation of black markets driven by the high cost of taxed legal pot.  People might be less discreet in public, thinking they’re not going to get busted for weed, Gettman says.  It’s also possible that there might be backlash among some police against the growing public acceptance of marijuana.

I am grateful to Professor Gettman for assembling this state-by-state marijuana arrest data, though it only provides the most basic of essential information about marijuana enforcement practices. It would be, of course, valuable and important to have more data on specific marijuana charges (other than just the possession/sale distinction in the data), as well as more data on the demographics of who is getting arrested.  And breaking down county-by-county data could also be quite informative and useful, especially in prohibitionist states that border full legalization states.  Last but not least, I do not believe there is any collection of data on what becomes of all these arrests, and I would guess that the rate at which an arrest turns into a formal charge and a conviction varies dramatically from jurisdiction-to-jurisdiction.