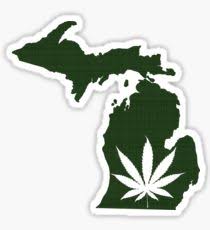 As reported in this local article, headlined "Michigan approves marijuana legalization vote for November," the Wolverine State is now positioned to be the latest political battleground for the debate over recreational marijuana reform. Here are the details:

The battle to free the weed officially started Thursday when the State Board of Canvassers ruled that a group pushing a proposal to legalize marijuana for recreational use got enough signatures to qualify for the Nov. 6 ballot. The 4-0 decision by the board was met with cheers by advocates for the proposal.

"The people of Michigan deserve this. They earned it," said Rick Thompson, a board member of the Michigan chapter of the National Organization for the Reform of Marijuana Laws or NORML. "We've faced many trials and tribulations. We've had so many stop and go signs from the federal government. That's why states have to take the reins on the issue and really be the crucibles of democracy that they've always been intended to be."

It was the second time that the coalition had turned in enough signatures to get on the ballot. The last time, however, it didn't get the signatures in a state-mandated 180-day window and the petition was thrown out. But the coalition didn't have the same problem this time around. "We expected this," said John Truscott, spokesman for the Coalition to Regulate Marijuana Like Alcohol. "Now we'll be out and about talking to people and educating them about the issues."

Scott Greenlee, executive director of the Healthy and Productive Michigan political action committee, which opposes the ballot proposal, urged the Board of Canvassers to keep the issue off the ballot because marijuana is still considered an illegal drug by the federal government. "By putting this on the ballot, you're disregarding federal law," he said. "I recognize that other states have done it, but like my mom always told me, 'Just because your friends jump off a bridge, doesn't mean you have to do the same thing.'"...

The Michigan marijuana ballot proposal would:

Michigan voters have already weighed in on marijuana once, approving cannabis for medical use in 2008 by a 63%-37% margin. As of March, 1, 277,752 people are medical marijuana cardholders and 43,131 people are caregivers who can grow up to 72 plants for up to five cardholders. The state is in the process of vetting applications of people who want to get into the medial marijuana business, which is expected to generate at least $700 million in sales. That financial prediction is estimated to grow to more than $1 billion a year if voters pass the ballot proposal and Michigan becomes the ninth state to legalize marijuana for adult recreational use....

But getting the ballot proposal passed is not a foregone conclusion, despite recent polls showing more than 60% support for legalizing marijuana. Healthy and Productive Michigan has $215,286 for the battle ahead, primarily from Smart Approaches to Marijuana, a Virginia-based organization that supports cannabis for medical, but not recreational uses.

"We'll continue to press forward with education and explain to the public the problems that recreational marijuana will cause in our state," Greenlee said. "And once it's certified for the ballot, we'll have a number of people from Michigan who will come in and support us."

The Coalition to Regulate Marijuana like Alcohol has raised more than $1 million, but spent the vast majority on paying the firm that collected petition signatures. According to campaign finance reports filed this week with the Secretary of State, the coalition has only $17,326 in available cash for the upcoming campaign.