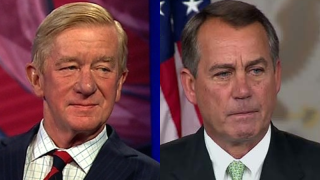 As reported in this company press release, "Acreage Holdings (“Acreage”) (www.acreageholdings.com), one of the nation’s largest, multi-state actively-managed cannabis corporations, announced the appointments of former Speaker of the United States House of Representatives John Boehner and former Governor of the State of Massachusetts Bill Weld to its Board of Advisors." Here is more from the announcement:

While we come at this issue from different perspectives and track records, we both believe the time has come for serious consideration of a shift in federal marijuana policy. Over the past 20 years a growing number of states have experimented with their right to offer cannabis programs under the protection of the 10th amendment. During that period, those rights have lived somewhat in a state of conflict with federal policy. Also, during this period, the public perception of cannabis has dramatically shifted, with 94% of Americans currently in favor of some type of access, a shift driven by increased awareness of marijuana’s many medical applications.

We need to look no further than our nation's 20 million veterans, 20 percent of whom, according to a 2017 American Legion survey, reportedly use cannabis to self-treat PTSD, chronic pain and other ailments. Yet the VA does not allow its doctors to recommend its usage. There are numerous other patient groups in America whose quality of life has been dramatically improved by the state-sanctioned use of medical cannabis.

While the Tenth Amendment has allowed much to occur at the state level, there are still many negative implications of the Federal policy to schedule cannabis as a Class 1 drug: most notably the lack of research, the ambiguity around financial services and the refusal of the VA to offer it as an alternative to the harmful opioids that are ravishing our communities.

We are excited to join the team at Acreage in pursuit of their mission to bring safe, consistent and reliable products to patients and consumers who could benefit.  We have full confidence in their management team and believe this is the team that will transform the debate, policy and landscape around this issue....