Does the new Medical Cannabis Research Act now have a real shot at becoming law? 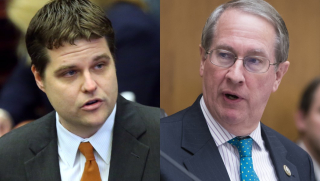 The question in the title of this post is prompted by this notable new Bloomberg article headlined "Medical Marijuana Bill Gains Backing of Key Republican in House." Here are the interesting details from the piece:

That backing by the conservative Virginia Republican potentially bolsters the bill’s chances in the House. Representative Matt Gaetz started circulating a handout Tuesday night explaining his Medical Cannabis Research Act, with Goodlatte listed as a co-sponsor. "I can confirm that the chairman will co-sponsor," said Kathryn Rexrode, a spokesman for Goodlatte, who is not running for re-election, in an email.

A spokesman for Gaetz said the measure was to be introduced on Wednesday or Thursday, with its sponsors set to hold a news conference on Thursday.... A draft of the legislation was also obtained Tuesday by Bloomberg News -- as well as a separate summary Gaetz was circulating outside the House chamber.

That summary listed current co-sponsors as Goodlatte and fellow Republicans Dana Rohrabacher of California and Karen Handel of Georgia; as well as Democrats Alcee Hastings and Darren Soto of Florida; Steve Cohen of Tennessee and Earl Blumenauer of Oregon.

The measure, as described would increase the number of federally approved manufacturers of cannabis for research purposes, and it would also provide a "safe harbor" for researchers and patients in clinical trials so that institutions such as universities would not risk losing federal funding.  The bill makes it clear that the Department of Veterans Affairs could refer patients for clinical trials, and eligible researchers at the VA could perform research on medical cannabis.

Clear standards on federally approved growers would be imposed.  At the same time, the measure was described as fostering innovation, making it easier for industry leaders to work with researchers to develop new scientific breakthroughs.

Even so, the chances that most of Gaetz’s Republican colleagues will help him pass the bill in an election year are slim.  And the odds of Sessions reversing course are also long....

Asked if he’s talked to the attorney general about his new bill, Gaetz said he has not. He joked of Sessions, "doesn’t call or visit me anymore." Gaetz is among House conservatives who have been criticizing the Justice Department in unrelated battles over providing Congress documents tied to the FBI’s handing of its investigations of Hillary Clinton’s emails, and the Russia inquiry led by Special Counsel Robert Mueller.

Trump offered qualified support for legalization while on the presidential campaign trail, saying that medical marijuana “should happen” and that laws regarding recreational usage should be left in the hands of the states. Trump made his assurances this month after Republican Senator Cory Gardner of Colorado, a state that has legalized marijuana, had held up Justice Department nominees.

This article is right to suggest that the odds of any marijuana reform making it through Congress these days are slim. But because the Medical Cannabis Research Act sounds like a very modest proposal that has the backing of a key Committee Chair, this bill would seems to at least have some chance. Indeed, because there are a number of other more robust federal marijuana reform proposals gaining attention and sponsors, it strikes me as even possible that AG Jeff Sessions might not oppose this proposal as actively as he may be inclined to oppose others making the rounds.  That all said, I still think the most likely answer to the question in the title of this post is "no."

UPDATE: Over here at Marijuana Moment, Tom Angell has more details on the provisions of the Medical Cannabis Research Act.