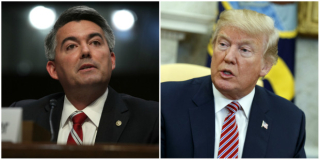 As reported in this CNN piece, "Trump promises GOP lawmaker to protect states' marijuana rights," a little more than three months after Attorney General Sessions decided to rescind the Cole Memo stating that federal prosecutors would not prioritize criminal enforcement against state-compliant marijuana businesses, President Donald Trump gave a Colorado Senator his word that he was eager to protect state marijuana reform efforts.  Here are the basic:

Washington (CNN)President Donald Trump told Colorado Republican Sen. Cory Gardner that the President will support efforts to protect states' that have legalized marijuana, according to a statement from Gardner released Friday.

The deal, which was first reported by The Washington Post, comes after Gardner said he'd block all Justice Department nominees after Attorney General Jeff Sessions rescinded guidance from the Obama administration, known as the Cole memo, that had adopted a policy of non-interference with marijuana-friendly state laws.

The Department of Justice was not consulted on this promise to Gardner from the President, according to a source familiar.

"Late Wednesday, I received a commitment from the President that the Department of Justice's rescission of the Cole memo will not impact Colorado's legal marijuana industry," Gardner said in a statement. "Furthermore, President Trump has assured me that he will support a federalism-based legislative solution to fix this states' rights issue once and for all."

He continued: "Because of these commitments, I have informed the Administration that I will be lifting my remaining holds on Department of Justice nominees." Gardner said he and his colleagues are working on a bill that would prevent the federal government from interfering in states' marijuana legalization. "My colleagues and I are continuing to work diligently on a bipartisan legislative solution that can pass Congress and head to the President's desk to deliver on his campaign position," he said in the statement.

White House press secretary Sarah Sanders called the statement from Gardner "accurate" during Friday's press briefing. "The President did speak with the senator," she said. "The statement that the senator put out today is accurate."

In many respects, it is somewhat amazing that Prez Trump was able to go the first 15 months of his presidency without ever speaking directly about federal or state marijuana policies. But now I think it is even more amazing that the decision by Attorney General Jeff Session to rescind the Cole memo has now directly led to the President of the United States indicating his support for a "federalism-based legislative solution" to modern marijuana reform issues.