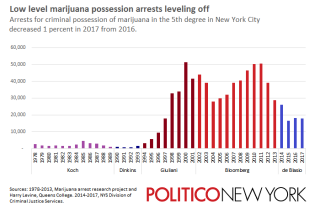 The  Leafly folks are doing a three-part series on cannabis in New York City, and this first part looks at arrests under the headline "Racial Disparities in NYC Cannabis Arrests Are Getting Worse." (The discussion in the piece builds off this Politico article last month headlined "Racial disparities persist in New York City marijuana arrests.)  I recommend both pieces in full, and here are portions of the Leafly piece:

Under Mayor Bill de Blasio, 85% of the people arrested for cannabis offenses were people of color. Under Michael Bloomberg, that figure was 84%. How can the rest of the country continue to make progress — decriminalizing in big cities, legalizing in more and more states — while New York City actually goes backwards?

That’s what members of New York’s City Council wanted to know last week. In a joint meeting of the Council’s Committee on Public Safety and Committee on the Justice System, councilmembers questioned leaders of the New York Police Department about racial disparities in the enforcement of the city’s cannabis laws. It was not a congenial affair. Councilmembers repeatedly took the NYPD to task for withholding critically important arrest data, and for the glaring racial disparities in the little data that was offered up for public scrutiny.

Councilmember Donovan Richards, head of the public safety committee, started off the session by airing data on marijuana arrests, per New York City mayor, during their first three years in office: 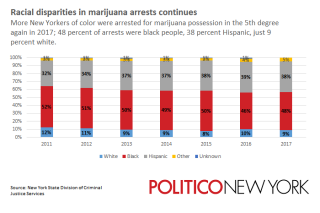 According to a survey of city residents, in the past year, 33% of whites, 32% percent of blacks and 27% of Latinos in New York City have acknowledged consuming marijuana.

Noting those figures, Councilman Richards, who is black, asked: “Are blacks the only ones using marijuana in New York City? It’s pretty even across the spectrum of marijuana use. So why is so much enforcement happening in communities of color?”

Chief Shea dodged the question. He said that in 2014, the city made a legal differentiation between ‘using marijuana’ and ‘burning marijuana.’ Since then, he said, 90% of arrests for marijuana are for ‘burning.’

That didn’t mollify Richards. “Communities of color are not the only ones ‘burning,’” he said.

Under Mayor de Blasio, 85% of the people arrested for cannabis offenses were people of color. Under Mayor Bloomberg, that figure was 84%. “If the administration is serious about changing the racial disparity of arrests,” said Richards, “we are not seeing that.”

Chief Shea defended the NYPD’s arrest statistics. “We are following specific complaints from the public, regarding marijuana burned in public view.” He added, “We are probably the most transparent we have ever been as a department, as an administration.”

This seemed hard for Council members to believe, because no data was presented by the department to corroborate their claims, despite repeated prior requests for said data to be presented before the hearing.