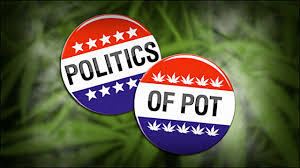 Long-time readers know I have often posted articles and commentaries suggesting that politicians would be wise to see the potential to attract younger and independent voters by showing interest in marijuana reform.  This new Politico article suggest some folks running for Congress are finally getting this message.   The full headline of the lengthy piece highlights its themes: "These Red-State Democrats Think Legal Marijuana Can Help Them Win: With sky-high approval rates, pot is an issue challengers say will cure the Democratic malaise in Trump country."  Here are excerpts that everyone interested in the politics of marijuana reform should read in full:

Not so long ago — like maybe last cycle — a Democratic challenger in a state this conservative wouldn’t have been caught dead making an unqualified endorsement of a drug federal authorities still consider as dangerous as heroin by categorizing it as Schedule 1.  But attitudes about marijuana, not to mention state laws, have changed so quickly and so broadly across the country that Democrats even in deeply red states like Indiana not only don’t fear talking about the issue, they think it might be a key in 2018 to toppling Republican incumbents.  The numbers, they say, are on their side, not the side of the politicians who either duck the subject or endorse Attorney General Jeff Sessions’ apparent desire to return federal marijuana policy back to the “Just Say No” days of the Reagan administration.

In a 2016 poll of Indiana residents, approval for medical marijuana was at 73 percent.  In a state struggling, like so many others, with a massive opioid crisis, there’s been no sign that support for legalizing marijuana has waned. A 2012 survey from the Bowen Center of Public Affairs showed that 78 percent of Hoosiers supported taxing marijuana like alcohol and cigarettes, far above the 55 percent who supported then-governor Mike Pence — a sign that support for marijuana law reform in Indiana is no statistical blip.  In fact, according to [congressional candidate Dan] Canon, it has only gotten stronger, and not just in blue bubbles like Bloomington but in rural and suburban communities, too. That’s why, in December, Canon released a web video ad declaring his stance clearly, “Here’s one simple solution that’s long overdue: We need to legalize medical marijuana nationwide.” He even got some international press out of it.

Subsequently, his chief primary opponent, law school professor Liz Watson, instead of criticizing Canon’s position, posted a detailed pro-medical marijuana position on her website to eliminate any daylight between her and Canon on this issue. “In Southern Indiana, we are battling a raging opioid epidemic.  The last thing we need is for the federal government to punish people for turning to non-addictive alternatives to opioids,” she told POLITICO Magazine.  “We also do not need the federal government restricting study into the medical uses of marijuana.  Federal law currently categorizes marijuana as a Schedule 1 narcotic, along with heroin, while oxycodone is Schedule 2. That makes no sense.” Watson’s stance nearly guarantees that no matter who survives the primary to face Trey Hollingsworth in the general, the Democrat in the race will be on the record as in favor of medical marijuana.

The candidates of Indiana’s 9th are not alone in their desire to use marijuana as a rallying flag. House races in Kentucky, West Virginia, and Pennsylvania, plus Senate races in Texas and Nevada all feature Democratic candidates who have taken strong stands in favor of changing the federal marijuana laws, and running against Republican incumbents who have not.

“There’s nationwide support for recreational marijuana, and support for medical marijuana is even higher than that,” Al Cross, the director of the Institute for Rural Journalism and Community Issues at the University of Kentucky, told POLITICO Magazine.  According to Cross, there’s not much difference in the support for marijuana legalization in rural Southern states than in the Western blue states more commonly associated with marijuana.  “For some voters, marijuana could be a defining issue. We just don’t know how many that’s going to be yet.”...

It won’t be known for some months yet whether legalization has the power to take out sitting Republicans, but there’s no question that it is potent enough to change the complexion of primary races, at least in districts that have large college populations.

Take a look at what’s happening across the Ohio River from the Indiana 9th, in Kentucky’s 6th Congressional district, which includes both the University of Kentucky and Eastern Kentucky University.  The Democratic field to unseat the three-term Republican incumbent Andy Barr has developed into an interesting portrait of the current Democratic Party coalition: a black state senator, a female veteran, and a gay mayor.  State Senator Reggie Thomas, who represents a portion of Lexington in the Kentucky Senate, was first in the race to come out in favor of medical marijuana.  In a web video he states, “The evidence is clear. Medical marijuana helps those with chronic pain and other medical conditions.” In the same 60-second video, Thomas announced he was signing on as a co-sponsor of a medical marijuana bill in the state Senate.  Asked by POLITICO Magazine if there was a campaign strategy associated with his advocacy of medical marijuana in order to differentiate himself from his primary opponents, Thomas wouldn’t take the bait, saying only that, “it’s just the right thing to do.”...

There are few places where marijuana politics are more exciting than in West Virginia, thanks to state senator (and retired U.S. Army major) Richard Ojeda, who is currently a candidate for Congress in West Virginia’s 3rd with a position on medical marijuana that has given him strong statewide name recognition.  “Anyone with half a brain should know that marijuana should never be Schedule I,” Ojeda told POLITICO Magazine over the phone, sounding more like Senator Cory Booker of New Jersey than his own state’s Democratic senator, Joe Manchin.

Not merely an advocate for medical marijuana, Ojeda (pronounced oh-JEH-dah) criticizes the federal law that requires mandatory prison sentences for criminal marijuana cultivation: “One to five years? That’s garbage,” he told me. Instead, Ojeda, 47, believes that outlaw marijuana growers shouldn’t go to prison at all.  He thinks it should be a misdemeanor for a first offense, and that the harshest sentence for a repeat offender should be home confinement.  Those positions were once far outside the Democratic Party mainstream, but it’s difficult for Ojeda’s opponents to characterize him as a liberal who is soft on crime when he served three tours in Iraq and Afghanistan.

In 2016, Ojeda ran for a West Virginia state Senate seat against a longtime incumbent Democrat and won the primary by 2,000 votes.  In his opening act as a freshman legislator, Ojeda sponsored a medical marijuana bill and quarterbacked it through both chambers, making West Virginia the 29th state to legalize it.  This was a stunning turn of events, even for marijuana advocacy groups, who had spent no money to support Ojeda’s effort. “There wasn’t a single penny spent, and we won,” Ojeda told POLITICO Magazine.  “We did it because I got up and started speaking about it. And then the phone lines [in the legislature] lit up because the people of West Virginia know.”...

These red-state Democrats have found strong footing on a position to the left of their party’s leadership in Washington, D.C., and it seems to be working for them. None of them seem shaken by Attorney General Jeff Sessions’ recent announcement he would end the Obama administration’s hands-off approach to prosecuting marijuana crimes in states that had legalized it. Ojeda told POLITICO Magazine: “I think we are on the verge of eventually voting in favor of marijuana [at the national level],”