New report suggests big increase in pedestrian fatalities in marijuana legalization states... but only by leaving out California 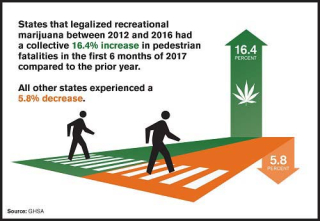 This new press release, headlined "No National Progress in Reducing Pedestrian Fatalities," details the finding of this new report by the Governors Highway Safety Association (GHSA) which "projects nearly 6,000 pedestrians were killed in motor vehicle crashes in the U.S. in 2017, marking the second year in a row at numbers not seen in 25 years."  Here is more from the press release that advocates for marijuana reform should consider:

States reported a total of 2,636 pedestrian fatalities for the first six months of 2017.  Adjusting the raw data based on past data trends, GHSA projects that pedestrian deaths in 2017 will total 5,984, essentially unchanged from 2016, in which 5,987 people on foot lost their lives in motor vehicle crashes.  Pedestrians now account for approximately 16% of all motor vehicle deaths, compared with 11% just a few years ago.

Two recent trends present an interesting correlation with rising pedestrian fatalities: the growth in smartphone use nationally and the legalization of recreational marijuana in several states.  While the report does not find or imply a definitive link between these factors and pedestrian deaths, it is widely accepted both smartphones and marijuana can impair the attention and judgment necessary to navigate roadways safely behind the wheel and on foot.

The reported number of smartphones in active use in the U.S. increased 236% from 2010 to 2016, and the number of cell phone-related emergency room visits is increasing as the devices before more prevalent in daily life.

The seven states and D.C. that legalized recreational marijuana use between 2012 and 2016 experienced a collective 16.4% increase in pedestrian fatalities for the first half of 2017, while all other states saw a combined 5.8% decrease.

As report author [Richard Retting of Sam Schwartz Consulting] notes, “This preliminary 2017 data is the first opportunity to look at marijuana-impairment as a possible contributing factor in pedestrian deaths, given the recent law changes. It’s critical to use this early data to look for potential warning signs.”

Without discounting the significance of the interesting data in this report, close followers of marijuana reforms should be able to identify some important quirkiness in how these data are assembled in the report:

The seven states (Alaska, Colorado, Maine, Massachusetts, Nevada, Oregon, Washington) and DC that legalized recreational use of marijuana between 2012 and 2016 reported a collective 16.4 percent increase in pedestrian fatalities for the first six months of 2017 versus the first six months of 2016, whereas all other states reported a collective 5.8 percent decrease in pedestrian fatalities.

Notably missing from the states listed here is California, which also legalized recreational use of marijuana in 2016 along with Maine, Massachusetts and Nevada. Notably, California actually saw a major decrease in pedestrian fatalities for the first six months of 2017, and I believe that moving California from the "all other states" category into the legalization category would actually lead to the legalization states to have collectively a larger decrease in pedestrian fatalities than the "all other states" group.

Critically, California did not have operating recreational marijuana stores in the first part of 2017, so there is a plausible basis for saying that it should not be considered a "full legalization" state until 2018. But, critically, the same is true for Maine, Massachusetts and Nevada (Nevada got stores going in the second part of 2017, and neither Maine or Massachusetts has stores operative yet).  I see little basis for including Maine, Massachusetts and Nevada in this analysis and leaving out California other than an interest in having the numbers come out a certain way.

Also critical in any assessment of this data is to appreciate the "small number" dynamics and the challenge of identifying what may have significantly changed from 2016 to 2017 in "mature" marijuana reform states.  Colorado, for example, had a reported pedestrian fatality increase in this new report of only 4 persons, from 33 to 37 in the relevant period from 2016 to 2017;  but the comparable data from 2013 and 2014, when legal recreational sales started in this state, indicates big pedestrian fatality decrease in Colorado from 33 down to 23.