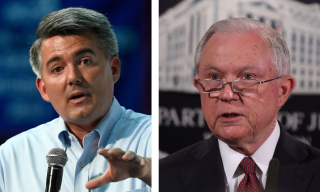 It’s been a month since the pot blockade began, and U.S. Sen. Cory Gardner is standing firm in his vow to jam all appointments to the Department of Justice until Attorney General Jeff Sessions softens his stance on marijuana.

So far, his siege to protect both Colorado’s cannabis industry and the state’s sovereignty has prevented as many as 11 nominees from getting a Senate floor vote — the last major step before they can start work — and there is little indication that Gardner, R-Colo., and Sessions are any closer to finding common ground. “It may never resolve itself,” said U.S. Sen. Chuck Grassley, R-Iowa, who chairs the committee in charge of getting these nominees to the floor.

If that happens, the consequences would extend far beyond the 11 nominees that Gardner has put on ice. More than 20 other candidates are in the congressional pipeline for Justice-related jobs, including U.S. marshals and U.S. attorneys assigned to states across the country. One even hails from Colorado: David Weaver, a former Douglas County sheriff in line to become the state’s next U.S. marshal....

“Senator Gardner does a real disservice to the nation as a whole and we urgently ask him to reconsider his rash and ill-advised obstructionism,” said Chuck Canterbury, president of the National Fraternal Order of Police. “Policy differences should be worked out by a dialogue and not turn into hostage situations.”

At the root of the fight is a decision last month by Sessions to rescind an Obama-era policy that generally left alone states such as Colorado that have legalized marijuana, which remains illegal on a federal level. While the change hasn’t led to federal raids on pot dispensaries — and business largely has continued as usual — the move still sent shock waves through the fledgling cannabis industry.

Gardner wasn’t able to convince Sessions to reconsider when the two Republicans met last month, though aides to the Colorado lawmaker said the two sides haven’t given up on negotiations. “Our staff and DOJ staff continue to talk and meet to discuss a path forward which recognizes Colorado’s state’s rights and ensures law enforcement has the authority and tools needed to protect our communities,” said Casey Contres, a Gardner spokesman, in a statement. “These discussions continue to be necessary and we appreciate their willingness to have them.”...

[Debate over congressional spending bills mean] it could be another month or more before there’s a chance to resolve the issue — and another month in which Gardner is expected to keep up the pot blockade. “He opposed the legalization of marijuana in 2012 but is not going to sit back and let Colorado’s rights be trampled on by the federal government,” Contres said.

Under Senate rules and tradition, lawmakers are allowed to put a hold on nominees put forward by the White House — a tactic that’s often used to extract concessions from the executive branch. These holds can be overridden, but doing so requires party leaders to chew up valuable time on the Senate floor.

For the time being, Gardner’s hardball approach hasn’t caused much public strife among his Senate Republican colleagues. “I can understand why he did it,” said Grassley, who nonetheless disagreed with Gardner’s argument for states’ rights. “I’m an advocate for federal law under the Supremacy Clause of the constitution that federal law overrides state law.”

Senate Majority Leader Mitch McConnell of Kentucky also is awaiting a floor vote for a U.S. marshal candidate in his state. Aides to McConnell did not respond with comment, though Grassley said it’s up to him to broker a solution and end the siege. Said Grassley of the nomination process: If McConnell “isn’t willing to intervene then you know it all stops.”