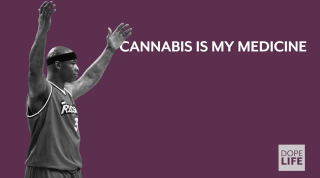 The title of this post is one line in the heart of this extended essay, headlined "9 Reasons to End the War on Marijuana," authored by former NBA player Al Harrington at The Players' Tribute. Here are a few excerpts from the piece:

I was never into marijuana when I was in the league, but I tried everything the doctors could prescribe. After my career, when I was around 32, after seeing what cannabis did for my grandma, I tried out cannabidiol, which is the non-psychoactive form of it — you get the anti-inflammatory effects and the pain relief without the THC, the chemical in marijuana that gets you high. I took the cannabidiol (CBD) as a cream or oil that could be rubbed on topically.

And look, I’m not trying to give out medical advice, so I’ll just say this — for me, cannabis changed my experience with pain. It has worked better, with fewer side effects, than anything I’ve gotten from a doctor. To this day, at 37, after 16 years in the NBA and back surgery and all the miles on my body, I’m still playing ball every week in L.A. Meet me out there. Afternoon runs Tuesday and Thursday. You don’t want none of this!

A few years ago I co-founded a business that produces non-psychoactive cannabis as well as THC-based products. Marijuana changed my life with regard to pain. Now it’s my second calling after basketball. And in a way, it all goes back to that day seven years ago in the garage with my grandma.

Being a minority in the cannabis industry has made me realize how rare it still is. That’s why I’m active in the Minority Cannabis Business Association (MCBA). The MCBA is about improving access and empowerment for minorities in the industry. It basically comes down to this: We’re the communities most hurt by the War on Drugs. Now that marijuana is legal in so many parts of the country, we shouldn’t be left without a seat at the table as the industry takes off.

Alcohol abuse and the NBA. You don’t hear a lot about it, but it’s there. It flies under the radar. This is just the reality: NBA players are affected by anxiety and stress. We’re like any other people with a full-time job that involves a lot of emotional and physical ups and downs.

Many NBA players have a few alcoholic drinks a day. I’ve seen the progression to where they’re having more than a few — just to unwind a little bit or relieve some pain. Pretty soon, it’s easy to be doing that after every game. That takes a serious toll. Pain is just part of sports, though. Athletes are going to seek ways to ease that pain.

I won’t say names, but in my 16 years in the league, I knew of at least 10 or 12 players who had their careers cut short due to alcohol. It either affected them physically or mentally, but one way or another, alcohol shortened their careers. No judgment from me, just facts. We all should be honest. It’s well known how liquor can destroy lives. But we’re still out here demonizing cannabis while alcohol is promoted at sporting events? It all starts with some honesty....

It’s my belief that 70-80% of today’s NBA players use marijuana in some form. I’m not exaggerating. I didn’t do any formal polls or anything like that. I just played in the league for 16 years, and that’s my opinion.

Due to the NBA’s ban on cannabis, most of the guys are doing it in the offseason. But I really think the number is that high.

Here’s why I’m telling you that. These guys are NBA superstars. It’s not the last dude on the bench who’s on his couch getting high. These are global icons — leaders, teammates, parents, citizens. These are world-class athletes, man. They’ve got pain and stress and anxiety and all the things any human has. The NBA has never been more skilled or more fun to watch.

So you tell me: Is cannabis ruining these athletes’ lives? Or are our laws and ideas behind the times?