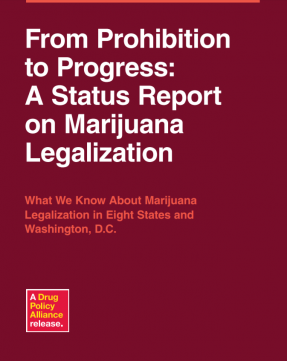 The reform advocacy organization Drug Policy Alliance has released today this big new data-dense report headlined "From Prohibition to Progress: A Status Report on Marijuana Legalization; What We Know About Marijuana Legalization in Eight States and Washington, D.C." I am likely going to do a series of posts about this report and its details particulars, but I will begin here by just quoting the first part of its executive summary:

Evidence shows that marijuana legalization is working so far.  States are saving money and protecting the public by comprehensively regulating marijuana for adult use. This success has likely contributed to the historically high levels of public support for marijuana legalization in the U.S., which has steadily grown to an all-time high of 64 percent.  The majority of Americans, across party affiliations, support legalizing marijuana, with 51 percent of Republicans now in favor.

Arrests and court filings for the possession, cultivation and distribution of marijuana have plummeted since voters legalized marijuana for adult use in eight states and Washington, D.C.  These states have saved millions of dollars and prevented the criminalization of thousands of people. Marijuana legalization has a positive effect on public health and safety.  Nationally, and in states that have legalized marijuana, youth marijuana use has remained stable or declined.  Legal access to marijuana is associated with reductions in some of the most troubling harms associated with opioid use, including opioid overdose deaths and untreated opioid use disorders.  DUI arrests for driving under the influence, of alcohol and other drugs, have declined in Colorado and Washington, the first two states to establish legally regulated adult use marijuana markets.  In addition, crash rates in both states have remained similar to those in comparable states that have not legalized marijuana.

At the same time, states are filling their coffers with hundreds of millions of dollars in marijuana tax revenues.  These revenues are being allocated for social good – to fund education, school construction, early literacy, bullying prevention, behavioral health, and alcohol and drug treatment.  In addition, the legal marijuana industry is creating jobs; it currently employs approximately 200,000 full and part-time workers across the country.