"Medical Pot Is Our Best Hope to Fight the Opioid Epidemic" 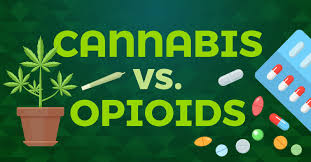 The title of this post is the headline of this new Rolling Stone article. Here are excerpts (with some links from the original preserved):

The pain-relieving properties of cannabis are no longer hypothetical or anecdotal. At the beginning of the year, the National Academies of Science, Medicine and Engineering released a landmark report determining that there is conclusive evidence that cannabis is effective in treating chronic pain.  What's even more promising is that early research indicates that the plant not only could play a role in treating pain, but additionally could be effective in treating addiction itself – meaning marijuana could actually be used as a so-called "exit drug" to help wean people off of pills or heroin.

"We're not just saying opioids make you feel good and so does cannabis, and now you're addicted to cannabis. There are direct reasons why this could actually help people get off of opioids," says Jeff Chen, director of UCLA's new Cannabis Research Initiative.  "If there is a chronic pain component, the cannabis can address the chronic pain component. We also find opioid addicts have a lot of neurological inflammation, which we believe is driving the addictive cycle. We see in preliminary studies that cannabinoids can reduce neurological inflammation, so cannabis could be directly addressing the inflammation in the brain that's leading to opioid dependency."

The theory that cannabinoids could decrease cravings for opioids is further supported by a small 2015 study published in the journal Neurotherapeutics, which found that the non-psychoactive cannabinoid CBD was effective in reducing the desire for heroin among addicts, and remained effective for an entire week after being administered. Similar effects have long been observed in animal studies.

Cannabis, in fact, may be exactly the kind of opioid replacement that politicians and pharmaceutical executives claim to be searching for. "I will be pushing the concept of non-addictive painkillers very, very hard," President Trump said in October, when declaring opioid abuse a national public health emergency.  The CEO of Purdue Pharma, which makes OxyContin, recently referred to the possibility of a drug that helps with pain but isn't physically addictive as the "Holy Grail."...

But already, many Americans seem to be replacing their pills with pot. A survey of pain patients in Michigan, published in 2016 in the journal of the American Pain Society, found medical cannabis use was associated with a 64 percent decrease in opioid use.  A 2016 study published in the health policy journal Health Affairs found that states with medical marijuana saw a drop in Medicare prescriptions and spending for conditions that are commonly treated with cannabis, including chronic pain, glaucoma, seizures and sleep disorders. And a 21-month study of 66 chronic pain patients using prescription opioids in New Mexico found that those enrolled in the state's medical cannabis program were 17 times more likely to quit opioids than those who were not.

At the same time, opioid-related deaths and overdose treatment admissions appear to be declining by nearly 25 percent in states where patients have access to legal marijuana. That number comes primarily from a 2014 study in the Journal of the American Medical Association, and has been supported by additional data from the American Journal of Public Health, the American Academy of Nursing, and the Journal of Drug and Alcohol Dependence.

However, more research is sorely needed. Stanford professor and drug policy expert Keith Humphreys described the studies concerning cannabis legalization and the decrease in opioid-related deaths and hospital admissions as falling victim to a form of logical error known as ecological fallacy. "It's correlation, not causation," he told me, because you cannot use statistical information about entire populations to understand individual behavior.

And researchers are eager for more solid evidence.  The Cannabis Research Initiative at UCLA is working on establishing one of the first studies that will directly administer cannabis to patients addicted to opioids, potentially providing a much more comprehensive understanding of how this all works. Chen, the initiative director, says he has scientists, clinics and a study design all lined up, but funding has been a struggle. "You're forced to go an extra ten miles with zero gas in the tank when it comes to cannabis research," he says. Between the lack of support from the federal government and pharmaceutical companies, Chen says he is "pretty much dependent on philanthropy."

Some (of many) prior related posts: