"At 'pot churches,' marijuana is the sacrament" ... and creating legal issues 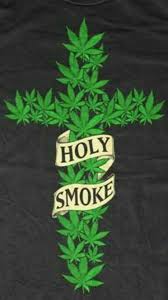 This prior post discussed holiday gifting of marijuana, and this article (which has a headline serving as part of the title of this post) provides another distinctive seasonable perspective on how modern marijuana reform echoes through various parts of modern life.  Here are highlights:

Services at the Coachella Valley Church begin and end with the Lord’s Prayer.  In between, there is the sacrament.  “Breathe deep and blow harder,” intoned Pastor Grant Atwell after distributing marijuana joints to 20 worshipers on a recent Sunday.  “Nail the insight down, whether you get it from marijuana or prayer. Consider what in your own life you are thankful for.”

A man wearing a “Jesus Loves You” baseball cap and toting a shofar, piped up. “Thank you, God, for the weed,” he called out. “I’m thankful for the spirit of cannabis,” a woman echoed from the back.  “I am grateful to be alive,” said another young woman, adding that she had recently overdosed — on what, she did not say — for the third time.   The small room, painted black and gold and decorated with crosses and Rastafarian symbols, filled with pungent smoke after an hour-long service of Christian prayers, self-help slogans and inspirational quotes led by Atwell, a Campbell, Calif., massage therapist and photographer.

Despite its mainstream Christian trappings, the Coachella Valley Church describes itself as a Rastafarian church, which is tough to define.  Originating in Jamaica and combining elements of Christianity, pan-Africanism and mysticism, Rastafari is a political and religious movement with no central authority.  Adherents use marijuana in their rituals.  The church’s leaders claim that religious freedom laws give them the right to offer marijuana to visitors without a doctor’s recommendation or abiding by regulations.  Some authorities beg to differ.

As more states ease access to marijuana, churches that offer pot as a sacrament are proliferating, competing with medical marijuana dispensaries and pot shops in the few states that have legalized recreational weed. While some claim Rastafari affiliation, others link themselves to Native American religious traditions.

The churches are vexing local officials, who say they’re simply dispensaries in disguise, skirting the rules that govern other marijuana providers, such as requirements to pay taxes.

In California, which legalized medical marijuana in 1996 and is preparing for sales of recreational marijuana to begin Jan. 1, churches tied to marijuana use have recently popped up in Oakland, Roseville, Modesto and San Diego, Orange and Los Angeles counties. A few have been shut down by law enforcement.  “I’m not going to say they’re not churches, but to the extent that they’re distributing marijuana, they’re an illegal dispensary, in my view,” said San Jose City Attorney Rick Doyle....

Nationally, such churches have opened in Indiana, where marijuana remains illegal, and Michigan, where medical marijuana is allowed.  Even in Colorado, which legalized pot in 2012, the “International Church of Cannabis” is testing the limits of state and city rules on consuming marijuana in public.  Marijuana churches typically require people to purchase a membership, then give or sell them marijuana and related products.  They may ask for ID such as a driver’s license but don’t require a doctor’s recommendation or medical marijuana identification card.

The churches rely on court rulings that made it possible for some groups, including Native Americans, to use federally banned drugs like peyote in religious ceremonies. Despite these rulings, courts have thus far rejected religious groups’ right to use marijuana, still illegal at the federal level, said Douglas Laycock, a University of Virginia Law School professor specializing in religious liberty issues.  Yet, he said, as more states legalize marijuana, courts may regard marijuana churches’ rights more favorably.

“Legalization changes everything,” Laycock said. “Religious use may not violate state law in some of these states. And if it does, legalizing recreational use but not religious use clearly discriminates against religion.”