"The bad science of medical cannabis" 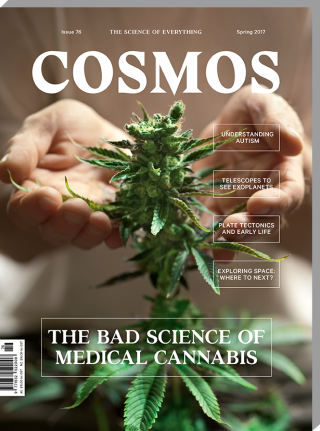 In the past two decades the disparity between evidence and anecdotes has grown extreme. Despite a majority of states (beginning with California in 1996) having legalised cannabis to treat medical conditions, federal restrictions on research remained ironclad. So researchers have great difficulty studying whether such medical uses have any basis in science. “What we have is a perfect storm,” says Daniele Piomelli, a neurobiologist at the University of California, Irvine.

Piomelli has been researching cannabis as best as he can. To comply with the mandates of the federal Drug Enforcement Agency (DEA), his precious store of 50 milligrams of THC must be kept in a locked safe, in a locked cool room, in a locked lab. “Any person on the street can go to a dispensary and for $10 obtain cannabis,” he says. “But if we bring it into the university we risk being raided by the FBI and DEA. We live in a schizophrenic state.” Even when researchers have gained permission to do research, the cannabis can only be supplied by one authorised lab, at the University of Mississippi. The lab has been growing the same variety for decades, one that bears little resemblance to the chemovars now available through dispensaries.....

There is no simple way out of the cannabis mess. With much of the world clamouring to use cannabis as a cure for all manner of ailments, and an exploding cannabis industry that is happy to push that demand along, it is crucial to establish just how real its clinical benefits and harms are – especially for children.

The medical establishment ideally needs randomised clinical trials, such as those Israel is admirably pushing ahead with. “I would say the Israelis have taken the lead,” [oncologist Donald] Abrams says. But 30,000 users in Israel and millions in the US aren’t waiting for such results. Some, like Abigail Dar, are too desperate. Others are wedded to their own trial-and-error experiments with different chemovars.

Another complicating factor is that the diabolically complex chemistry of the cannabis plant is too overwhelming to sort out through individual RCTs. Researchers are still scratching at the surface of a potential treasure trove of medicines that appear to act synergistically. The list of conditions to try them against appears never-ending. The number of trials needed to test each combination against each condition seems mindboggling.

The database collated by [Israeli researcher Dedi] Meiri and his clinical collaborators is now being prepared for publication. It should help link the pot-pourri of chemicals inside cannabis to its clinical effects. It may be second-tier science, but it appears to be one of the best strategies for navigating a path out of the haze that still envelops medical cannabis.