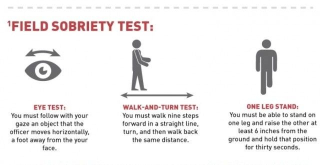 The Massachusetts Supreme Judicial Court this morning issued a unanimous opinion in Commonwealth v. Gerhardt, No. SJC-11967 (Mass. Sept. 19, 2017) (available here), which addresses matters of proof of marijuana-impaired driving.   This Boston Herald account of the ruling provides a punny summary in its headline: "SJC spliffs the difference in marijuana OUI case." Here is how the actual opinion gets started:

In this case we are asked to consider the admissibility of field sobriety tests (FSTs) where a police officer suspects that a driver has been operating under the influence of marijuana. Police typically administer three FSTs -- the "horizontal gaze nystagmus test," the "walk and turn test" and the "one leg stand test" -- during a motor vehicle stop in order to assess motorists suspected of operating under the influence of alcohol or other drugs.  These tests were developed specifically to measure alcohol consumption, and there is wide-spread scientific agreement on the existence of a strong correlation between unsatisfactory performance and a blood alcohol level of at least .08%.

The lack of scientific consensus regarding the use of standard FSTs in attempting to evaluate marijuana intoxication does not mean, however, that FSTs have no probative value beyond alcohol intoxication. We conclude that, to the extent that they are relevant to establish a driver's balance, coordination, mental acuity, and other skills required to safely operate a motor vehicle, FSTs are admissible at trial as observations of the police officer conducting the assessment. The introduction in evidence of the officer's observations of what will be described as "roadside assessments" shall be without any statement as to whether the driver's performance would have been deemed a "pass" or a "fail," or whether the performance indicated impairment. Because the effects of marijuana may vary greatly from one individual to another, and those effects are as yet not commonly known, neither a police officer nor a lay witness who has not been qualified as an expert may offer an opinion as to whether a driver was under the influence of marijuana.