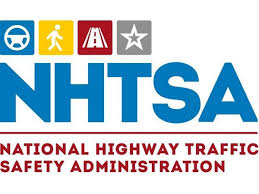 Though dated July 2017, I believe the National Highway Traffic Safety Administration (NHTSA) has only just this week released this lengthy report titled "Marijuana-Impaired Driving A Report to Congress." The report's introduction explains that it "has been prepared in response to a requirement in Section 4008 (Marijuana-Impaired Driving) of the Fixing America’s Surface Transportation Act (FAST Act)," and it highlights the limited research on marijuana-impaired driving and continued challenges:

Unlike alcohol, marijuana is classified as a Schedule I substance under the Controlled Substances Act. A much smaller number of studies have looked at the impairing effects of marijuana use on driving-related skills.  Less is known about these effects due in part to the typical differences in research methods, tasks, subjects and dosing that are used. A clearer understanding of the effects of marijuana use will take additional time as more research is conducted.  The extra precautions associated with conducting research on a Schedule I drug may contribute to this relative lack of research. For example, these include the need for a government license to obtain, store and use marijuana, the security requirements for storage, and documentation requirements and disposal requirements.

There is a need to improve data collection regarding the prevalence and effects of marijuana-impaired driving.  NHTSA has collected some data on the prevalence of marijuana use by drivers on a national basis, though NHTSA has been prohibited from continuing to collect this information.  In contrast, there is little State level data about the prevalence of use of marijuana by drivers being collected.  As States continue to change their laws regarding marijuana use in general and as it relates to driving, this lack of State level data prevents evaluation of the effect of policy changes on driver behavior, including willingness to drive while under the influence of marijuana, as well as the effect of marijuana on crashes, deaths and injuries.

This is frustrating. The journalism principle of placing the take home message in the first sentence should be adopted in public documents. How much damage does marijuana cause? How many crashes, how many traffic deaths?

After much digging, the reports indicate that, after correction for known crash factors, marijuana blood levels do not have an elevated rates over the marijuana free control group.

Thank you for making me search for that.

Then, even if the rate were elevated ten fold, it would still be around 5 deaths per billion miles traveled. This is a rate that is close to nil.

The FDA does that. They say some risk is 4 fold elevated, but it is still 4 in a million prescriptions. That is misleading nitpicking. Very annoying, and makes people no longer want to listen to these nitpickers when they do find a serious danger.