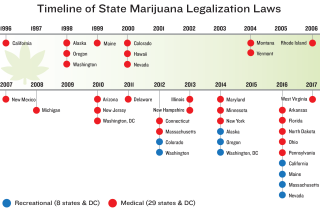 The folks at Third Way have this notable new publication titled "America’s Marijuana Evolution." Regular readers of this blog will be familiar with the ground covered in this piece, but it still makes for an interesting read based on how legal and policy changes are discussed.  Here is one excerpt focused on state laws and political developments:

A detailed analysis of the ten states to most recently legalize medical marijuana legislatively finds that most bills passed with large majorities, regardless of the party controlling the chamber. In nine of those ten states, the measure passed with at least 60% of the vote in the lower chamber of the state legislature. And in all but Ohio, the upper house voted in favor of legalization with at least 58% of the vote. In several states, the bills passed with more than 80% or even 90% approval—making it clear that medical legalization on the state level has gained wide support across the ideological spectrum.

Marijuana is even less of a partisan issue on the state level than on the federal level, though Democratic policymakers at all levels of government remain more supportive of reform than Republicans. In every single one of the ten states to most recently legalize legislatively, the majority passing the bill through each chamber of the state legislature was bipartisan. And while in nine of those ten states the Governor signing the bill into law was a Democrat, in the three most recent — Ohio, Pennsylvania and West Virginia — both chambers of the state legislature were controlled by Republicans. In fact, in Ohio Republican Governor John Kasich signed his state’s bill into law, making it the first to enact marijuana legalization through a process that was Republican-controlled at every stage. And the Democratic Governor of West Virginia who signed his state's bill into law earlier this year — Jim Justice — has since announced he is switching party affiliation to be a Republican.

When Vermont became the first state in the nation to pass a recreational legalization bill this spring, it did so with healthy majorities as well—20-9 in the Senate and 79-66 in the House. Though only a handful of Republicans voted for the bill in each chamber, when Republican Governor Phil Scott vetoed it, he said that he is not philosophically opposed to marijuana legalization and has since been working with the legislature on a new bill that addresses some specific concerns he had raised.

Increasingly, marijuana reform is becoming a bipartisan issue in state legislatures, regardless of the party in power. That’s especially true for medical legalization, which is now the law of the land in the majority of states.

We analyzed the state legislative and gubernatorial elections immediately following legalization in each of the ten states that most recently legislated medical marijuana, and we couldn’t identify a single instance of negative political consequences for elected officials who supported legalization of medical marijuana.

We could find no state legislative races in which voting in favor of a medical marijuana bill was detrimental. Only two state senates flipped party control after legalization—New York and Minnesota—but in both the medical marijuana vote had been overwhelmingly in favor and bipartisan. Only two state lower chambers flipped party control as well — Minnesota and New Hampshire — but in neither state was marijuana a major campaign issue. Not a single Governor in any of these ten states lost a reelection campaign because he or she signed a medical marijuana bill into law — in fact, only one Governor lost their reelection at all (Democrat Pat Quinn of Illinois), and it was to an opponent who did not oppose medical marijuana legalization.

It seems clear that legalizing medical marijuana is not a political liability for Governors or state legislatures. In fact, given the overwhelming popularity of medical marijuana, just the opposite may prove to be true going forward, especially as more states legalize and those that don’t are left behind.

State policymakers have led the way on marijuana reform. More than half of the 29 states that have legalized medical marijuana did so legislatively, and more are likely to follow. The growing bipartisan nature of state reforms and the absence of any major political consequences for those policymakers who enacted them illustrate that policymakers can feel comfortable publicly supporting legalization, regardless of party affiliation.