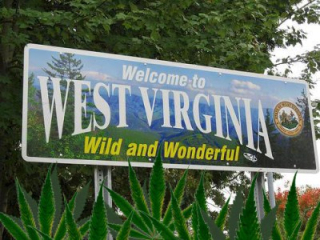 The title of this post is the headline of this extended Washington Post magazine article exploring whether marijuana reform could help address some of the woes to be found in Wast Virginia.  Here are excerpts:

One of the leading proponents of loosening restrictions on marijuana in West Virginia is Democratic state Del. Mike Pushkin, who represents parts of Charleston and its surrounding areas. Pushkin is an unconventional pol — a cabdriver and folk musician who has spoken about his own struggles with addiction. He once told the Charleston Gazette-Mail how he spent 11 years living from crisis to crisis. “I’m sure there were times that my mother would have thought it more likely she would be attending my funeral than she would be attending my swearing-in at the Capitol,” he said.

It took a spiritual awakening to get his addiction under control. To stay sober, he told me, he volunteers at detox facilities and talks to addicts in area jails. This experience informs his policy positions. He’s sure West Virginia can’t arrest its way out of this drug crisis. And he has pushed his colleagues to consider marijuana in a new light. “While marijuana is described as a gateway drug, that’s not proven,” he says. “What is proven is that a lot of people who are prescribed painkillers get hooked on heroin.”...

In May 2016, Pushkin introduced a bill in the West Virginia House of Delegates to let adults grow, use and possess a limited quantity of marijuana, provided that they paid a one-time fee of $500. That month, he told the Charleston Gazette-Mail that he didn’t have high hopes for its passage. He was right: It wasn’t even debated in a committee. But it did spark media attention and prompted an eye-opening brief from the West Virginia Center on Budget and Policy, which showed that a marijuana tax could be a boon for the state, generating as much as $194 million annually if the drug were legal for adult use. That would be enough to eliminate West Virginia’s projected deficit and create a $183 million surplus, a dramatic improvement in a place that’s been slashing everything from higher education to Medicaid as it tries to stay afloat.

Indeed, Pushkin’s argument for marijuana legalization had a strong economic component. “They’re not having the types of budget issues in Colorado that we’re having here,” he told the Charleston Gazette-Mail. In Colorado, where pot is now fully legalized, the industry created 18,000 full-time jobs in 2015 alone. New Frontier Data, a financial consultancy in Washington, estimates that by 2020 the marijuana industry will create upward of a quarter of a million jobs in the United States, more than manufacturing is expected to create.

It’s hard to imagine anywhere that could use these jobs more than West Virginia. Since the 1980s, both coal and manufacturing in the Mountain State have been in a steep decline. As these industries have dried up, so have others that rely on them — such as freight rail, which has cut jobs by the thousands and begun pulling up tracks.