A look into Uruguay's unique (and uniquely important?) experiences with marijuana legalization 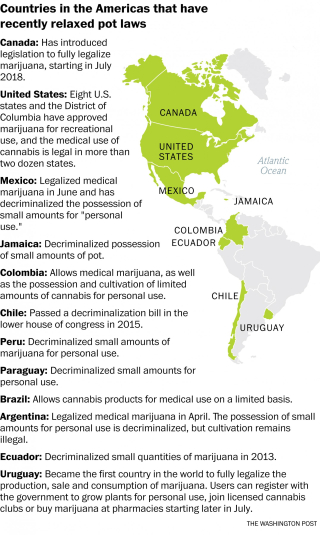 The Washington Post has this interesting new article taking a deep dive into on foreign nation's distinctive approach to marijuana reform. I recommend the article in full, and it is headlined "In Uruguay’s marijuana experiment, the government is your pot dealer." Here are excerpts:

Uruguay is the world’s first country to fully legalize the production, sale and consumption of marijuana. But under its strict rules, there will be no Amsterdam-style smoking cafes, and foreigners won’t have access to the national stash.

Nor will there be shops selling ganja candies, psychedelic pastries or any of the other edible derivatives offered in pot-permissive U.S. states such as Colorado and Washington, where entrepreneurial capitalism fertilizes the United States’ incipient marijuana industry.

Instead, Uruguay’s government has developed a legalization model whose apparent goal is to make marijuana use as boring as possible. A vast regulatory bureaucracy will determine everything from the genetic makeup of the plants to the percentage of psychoactive compounds in their flowers.

The endeavor puts Uruguay (population: 3.4 million) at the forefront of a growing list of nations and U.S. states experimenting with marijuana. Pot has been legalized for recreational or medical use in more than half of U.S. states and the District of Columbia, but it remains essentially prohibited under federal law. American activists have been bracing for a confrontation with the Trump administration and Attorney General Jeff Sessions, who opposes the liberalization trend.

Canada, Mexico, Colombia and other nations across the Americas also are moving to legalize cannabis on a limited basis. But only Uruguay has set up a comprehensive system to regulate every facet of the plant’s life cycle, from tiny seed to smoky haze. Uruguayans say their model is designed to strike a balance between prohibition and the kind of exuberant marijuana economy emerging in some U.S. states, where well-funded businesses may have incentives to encourage consumption.

In Uruguay, anything that smacks of commercial marijuana branding or advertising is banned. The two private firms authorized to supply the pharmacies with industrial quantities of dope — four tons annually — can’t even put their company labels on the packaging. “The risk of what they’re doing in Colorado is that you end up with something like the tobacco industry,” said Julio Calzada, one of the public health officials who designed Uruguay’s regulatory model after lawmakers approved legalization in 2013. He said the country won’t allow a competitive industry peddling pot versions of Marlboro and Camel. “The concept here is totally different.”

“To us, marijuana is a vegetable substance with a capacity to generate addiction, so what we’re trying to do is control the production, distribution and consumption of that substance as effectively as possible,” he said.

It’s no fluke that this is happening in socially liberal Uruguay. Gambling and prostitution are legal and regulated here. Uruguay is also the only Latin American nation outside Cuba that has broadly legalized abortion, and it was one of the first to recognize civil unions and adoption by same-sex couples. Uruguay also is accustomed to relatively high levels of regulation and a big state role in the economy, with an array of government-owned banks, gas stations and utilities. Over the years, activists began to argue: Why not weed?

The experiment is not without skeptics and detractors — one reason it has taken longer than expected to fully implement the country’s legalization model. Marijuana cultivation and consumption has been allowed for personal use, and the country now has at least 60 cannabis clubs that provide members with a monthly supply. But the government has been slow to roll out its system of pharmacy-based commercial sales to the general population.

Uruguay developed its pioneering model under ex-president José Mujica, a former Marxist guerrilla turned statesman. His successor, Tabaré Vázquez, a trained physician, largely has sought to play down the legalization experiment, seemingly wary of a potentially negative impact on Uruguay’s image. Legalization advocates close to the government say officials also have been hung up by international banking rules that sanction entities with ties to the narcotics trade.

Still, Uruguayan officials say the nation’s pharmacies will be stocked with cannabis sachets and ready to begin dealing in the second half of July. The newly created Institute for the Regulation and Control of Cannabis (IRCCA) will coordinate distribution.

Anyone over age 18 who registers in a government database will be able to buy up to 40 grams per month at one of three dozen participating commercial pharmacies. Instead of showing ID, buyers will place their thumb on a scanner that links to a government database and tells the pharmacy how much marijuana they are eligible to purchase.

More than 4,600 Uruguayans have registered for the system, according to the IRCCA website, and officials are expecting that number to increase substantially once marijuana users realize that the product sold in pharmacies is vastly superior to the low-grade weed available illegally on the streets. Some marijuana users have chafed at the idea of registering with the government. But even legalization advocates concede that such a safeguard is necessary to prevent traffickers from buying up pharmacy stocks and smuggling Uruguay’s crop into Brazil and Argentina, the country’s much-larger neighbors.

“A lot of consumers here don’t like the fingerprint system and point out that they don’t have to do anything like that to buy a bottle of wine,” said Martín Fernández, a human rights attorney in Montevideo who has become an expert on the country’s cannabis law. “But we see it as something transitional that could disappear with time.” ...

Officials say the new system will drain away customers from the black-market marijuana economy, where a kind of pot known as “Paraguayan Pressed” predominates. It is similar to cheap, low-potency marijuana that reaches U.S. streets from Mexico and is cultivated on large outdoor farms. The final product is littered with seeds and plant stems.

Its levels of THC, the main psychoactive ingredient, are typically below 5 percent, while the state-approved version soon to be sold in pharmacies will be available in seedless flowers (“buds”) at strengths of 5 and 10 percent THC, according to Eduardo Blasina, an agronomist who set up one of the two growing operations on state-leased land adjacent to the country’s maximum-security prison. “It’s one of the most secure places in the country,” he said....

One irony of the Uruguay model is that its pharmacies will be selling marijuana even though the country has not approved commercial sales of medical or health products derived from the plants. But it was pharmacy owners who petitioned the government to give them responsibility for retail sales, citing their experience handling controlled substances, said Alejandro Antalich, whose pharmacy trade association represents 300 stores. “The neighborhood pharmacist is one of the most trusted figures in Uruguayan society,” he said.

This is an important natural experiment. I am predicting more utility, from drops in crime, increased tax revenues, fewer suicides, accidents, and violent offenses, as marijuana slowly replaces alcohol culturally.