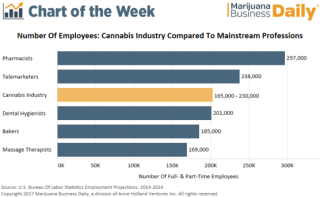 This new posting at Marijuana Business Daily, headlined "Cannabis industry employs 165,000-plus workers," includes this interesting chart highlighting just how many legal jobs might be linked to state-level marijuana reforms. Here is part of the text that goes with the chart:

With 165,000-230,000 full- and part-time workers, the U.S. cannabis industry has quickly become a major job generator. Cannabis-related businesses now employ more people than there are dental hygienists and bakers in the United States and will soon surpass the number of telemarketers and pharmacists.

The estimates – published in the newly released Marijuana Business Factbook 2017 – include employment data for retailers, wholesale grows, infused products/concentrates companies, testing labs and ancillary firms.  The job figures represent an impressive feat for an industry that has, for the most part, been operating legitimately only since 2009.  They also underscore marijuana’s rapid transformation out of the black market and into a viable economic force, capable of producing a host of new jobs and business opportunities for towns and communities across the country.

Employment figures were calculated using a variety of methodologies, including the use of survey data regarding the average number of employees for each type of company in the industry.  That information was then applied to the estimated number of companies in each sector to arrive at a rough idea of how many employees work in the industry. Only ancillary companies that glean a sizable portion of their revenue from the marijuana industry are included in these employment figures.

A majority of the jobs in the marijuana industry are currently with small businesses, most needing only a handful of employees to maintain daily operations.  Though the average number of employees at marijuana companies has been rising in recent years as businesses grow, the state-by-state nature of the marijuana industry has prevented companies from developing into large-scale enterprises that employ hundreds of people....

The cannabis industry is coming off a landmark year in 2016, when four states legalized recreational marijuana and another four approved measures tied to medical cannabis.  Additionally, Ohio and Pennsylvania legalized MMJ earlier in the year, while Louisiana passed a law to set up commercial cultivation and sales of medical cannabis.  Though it will take some time for these markets to fully develop, they have the potential to create tens of thousands of new jobs in the marijuana industry.

California’s recreational market alone could eventually bring in between $4.5 billion and $5 billion in annual retail sales – more than the nation’s entire legal cannabis industry generated in 2016 – so the impact adult-use legalization will have on business and employment opportunities in the state is massive.