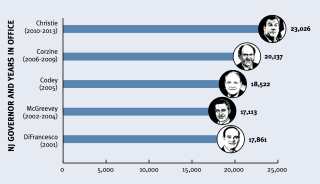 As noted in this recent post, a coming election for Governor in New Jersey suggests the possibility of coming major marijuana reform in the Garden State.  With that possibility clearly in mind, the ACLU of New Jersey has released this new report on marijuana enforcement in the state titled "Unequal & Unfair: New Jersey’s War on Marijuana Users."  This press release and this webpage provides highlights from the 70-page report, and here is an excerpt from the executive summary:

Indeed, our marijuana arrest problem is getting worse, not better.

Key findings of the report include:

• New Jersey wastes more than $143 million per year to enforce our marijuana possession laws.  Adding up the cost of police, courts, and corrections, New Jersey expends tremendous resources to implement and enforce marijuana prohibition. Indeed, throughout the past decade, New Jersey has spent more than $1 billion to enforce these laws. These are resources that could be invested in treatment, education, prevention, or other community needs.

• Nine out of ten marijuana arrests are of users, not dealers.  In 2013, marijuana possession arrests made up 88 percent of total marijuana arrests statewide. In other words, nearly nine out of 10 arrests made for marijuana were not of dealers or kingpins, but rather New Jerseyans who possessed the lowest amount counted by New Jersey law. In Monmouth County, this number reached 95 percent. It was 97 percent in the 8th Legislative District. In 14 New Jersey communities included in the study, 100 percent of arrests were for low-level possession in 2013.

These findings are particularly troubling when one understands the potential collateral: jail, loss of one’s job, a criminal record for at least three years, driver’s license suspension, up to $1,255 in fines and fees, and potential consequences for one’s immigration status, financial aid eligibility, access to public housing, and the ability to adopt children.