Will Michigan become the ninth US state, and first in Midwest, to fully legalize marijuana via ballot initiative in 2018? 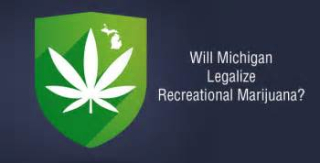 The question in the title of this post is prompted by this local article headlined "Pot petition drive officially begins for 2018 Michigan ballot."  Here are the basics:

Marijuana would be legalized for recreational uses and taxed at a rate of 16% under petition language that will be turned in to the Secretary of State today.

If the petition language is approved by the state Board of Canvassers, the group pushing the initiative — the Coalition to Regulate Marijuana like Alcohol — will have 180 days to collect 252,523 signatures from valid registered voters in Michigan. In order to get a cushion to account for signatures that might be thrown out, the group is setting a goal of gathering 350,000 signatures.

That’s a task that will take money, said Josh Hovey, a spokesman for the Coalition.  The group hopes to raise between $8 million and $10 million to both pay people to gather the signatures needed to get on the ballot and to wage a campaign to get the measure passed in November 2018.

“Prohibition is a failed big government program,” said former state Rep. Jeff Irwin, D-Ann Arbor, who is the political director of the coalition.  “We have 20,000 people arrested every year in Michigan. And we’re now going to be in a position to give our citizens a choice to end that.”...

The coalition will have an advantage this year over previous efforts to get the issue on the ballot.  The national Marijuana Policy Project, which has gotten involved in several other states where marijuana legalization has succeeded, has jumped into Michigan’s ballot drive.  So far eight states and the District of Columbia have legalized recreational marijuana, while 29 states have legalized some form of medical marijuana use.

The last group to try and get the issue on the 2016 ballot – MiLegalize – gathered more than 350,000 signatures, but not within the 180-day time frame.  MiLegalize, as well as the Michigan chapter of the National Organization for Marijuana Legalization or Norml, have signed on to the latest effort and will bring its army of volunteers to the push to free the weed.

Marijuana Policy Project has an extraordinary recent track record of success with marijuana reform initiatives, and my sense is that MPP will not get involved in a state campaign unless it feels confident it has a good chance of winning. Michigan will be such an interesting state to watch in the run up to 2018 because of both politics and geography: the state has an (outgoing) Republic Gov and it supported Prez Trump in 2016, but it has two Democratic senators and is sometimes thought of as more of a "blue" state; the state borders Canada and a number of upper-Midwest states (Indiana, Ohio, Wisconsin) that currently have fairly restrictive marijuana policies and politics.