Vermont Governor vetoes bill to legalize marijuana in state .... UPDATED with Gov's explanation for his veto 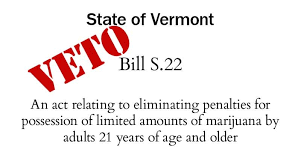 As reported in this local article, "Gov. Phil Scott on Wednesday vetoed legislation that would have legalized possession of small amounts of marijuana in Vermont."  Here is more:

At a highly anticipated press conference in his Montpelier office, the Republican governor said he could not sign S.22, which passed the Vermont House and Senate in the waning days of the recently concluded legislative session. But Scott said he was open to revisiting the debate with legislators — perhaps as soon as an expected veto session next month.

Vermont’s Democratic legislature is unlikely to override Scott’s veto, given that the bill squeaked through the House two weeks ago on a 79-66 vote.

The legislation would have allowed adults over age 21 to legally possess up to an ounce of marijuana and to grow as many as two mature plants per household, starting in July 2018. Similar to Washington, D.C.’s marijuana law, it would not have allowed for sale or commercial growing of the drug. The bill would also have created a commission to study how Vermont could tax and regulate marijuana sales, as Colorado and several other states have done.

The governor has said he does not consider marijuana legalization a priority and has concerns about the lack a roadside test to detect driver impairment.

Had Scott signed the bill, Vermont would have been the first state to legalize marijuana through legislative action rather by public referendum.

UPDATE:   I have now had a chance to read Vermont Gov. Phil Scott's remarks explaining his veto, and they are available at this link.  Here are some of the interesting particulars:

I have been clear since the campaign and throughout the session: I am not philosophically opposed to ending the prohibition on marijuana, and I recognize there is a clear societal shift in that direction. However, I feel it is crucial that key questions and concerns involving public safety and health are addressed before moving forward.

We must get this right. Let the science inform any policy we make around this issue, learn from the experience of other states, and take whatever time is required to do so. In my view, policymakers have an obligation to all Vermonters – and those who visit us – to address health, safety, prevention and education questions before committing the state to a specific timeline for moving forward.

More specifically – as I have said repeatedly throughout the campaign and this session – we should know how we will detect and measure impairment on our roadways, fund and implement additional substance abuse prevention education, keep our children safe and penalize those who do not, and measure how legalization impacts the mental health and substance abuse issues our communities are already facing.

From my vantage point, S.22 does not yet adequately address these questions. Therefore, I am returning this bill to the Legislature. I am, however, offering a path forward that takes a much more thorough look at what public health, safety and education policies are needed before Vermont moves toward a regulatory and revenue system for an adult-use marijuana market.

I’ll be providing the Legislature with recommended changes. And to be clear, if they are willing to work with me to address my concerns in a new bill passed during the veto session this summer, there is a path forward on this issue.

Those recommendations include the following:

Weakening these protections and penalties should be totally unacceptable to even the most ardent legalization advocates.

Second, I am asking for changes to more aggressively penalize consumption while driving, and usage in the presence of minors....

Third, the Marijuana Regulatory Commission section must be enhanced in order to be taken seriously. It must include a broader membership, including representatives from the Department of Public Safety, the Department of Health, the Department of Taxes, and the substance abuse prevention and treatment community.  The Commission must be charged with determining outcomes, such as an impairment threshold for operating a motor vehicle; an impairment testing mechanism; an education and prevention strategy to address use by minors; and a plan for continued monitoring and reporting on impacts to public health.