"The Marijuana Industry Is Getting Super-Sized" 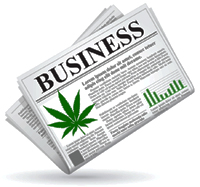 The title of this post is the headline of this notable new Forbes article.  Here are excerpts:

Retail sales for legal marijuana are growing so big and so fast that the industry is having to super size their operations. Growing and producing marijuana products is now happening on an industrial scale.

Retail sales in the U.S. from 20 jurisdictions were $6.5 billion, but according to Greenwave Advisors that number is projected to grow to $30 billion by 2021. In order to meet the demand for customers, the growers and makers of infused products are having to scale up their operations. More automation, more square footage and the ability to manage this fast growth is separating the mom & pops from corporate cannabis.

Berto Torres, Chief Operations Officer at GFarmaLabs in California has been with the company since it started with four grow lights and had a canopy of 3,000 square feet. They now have 700,000 square feet under management. Torres said the company's growth boomed after they made the jump to branded products and specifically after they won a Cannabis Cup award for chocolate truffles in 2014. “It created so much demand, we had to scale up,” he said, “We needed to organize ourselves and run and function like a normal corporate company.”... Of course success in the cannabis industry immediately comes with accusations of “going corporate.” “We were accused of selling out by having a consistent product,” said Torres. “I think we're one of the few companies that's been able to create a successful blending of both worlds.”

One of the companies that is helping the cannabis industry scale up in volume is Convectium. While some industrial equipment companies refuse to work with the cannabis industry, Convectium has jumped at the opportunity. “If this was a stagnant industry, slow growth would be okay. Cannabis is growing so fast, you get passed by if you don't automate,” said Danny Davis, a Managing Partner at Convectium. He added that a laid back chill attitude in this business won't work. “Aggressive is a solid attitude to have in cannabis.”

For example, when it comes to filling a cannabis oil cartridges for vaping some small companies fill them by hand using a syringe. Davis said it takes a company an hour to fill 100 cartridges in that manner. His machine can fill 100 vape cartridges in 30 seconds. “The demand for machines is 5 times what it was from one year ago,” he said. “We truly believe that the only way to scale is to add technology and standardization.” Like the people that criticize G Farma for going corporate, Davis said there are many operations that are resistant to change. “They don't trust technology,” he said. “Many of the companies out there are primitive, even the big ones, but they will learn they had better scale quickly.”

Kiva Confections is one of the biggest infused edible companies in California that has successfully grown. Co-founders Kristi Knoblich and Scott Palmer started with a couple of workers and now Kiva employs 85 people, with products in 1,000 dispensaries. The business began in their kitchen, but the fast growth has them moving to a 30,000 square foot facility. “We're looking at large scale equipment to prepare for the recreational market.” said Palmer. Kiva is also in Nevada and Arizona and has plans to expand to Colorado, Illinois and Hawaii....

The days of local growers selling out of backpacks to dispensaries wasn't that long ago, but it is definitely over. Growers must produce large volumes of consistent flower. Producers must be able to sell branded product that is the same from state to state and meet the demand of hundreds of dispensaries. Scaling up will be the new challenge for the biggest players in the marijuana industry.