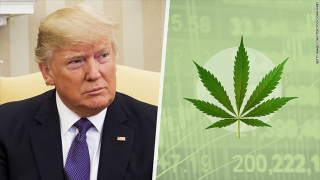 As reported in this Bloomberg piece, headlined "Trump Spurns Congress as He Signals Medical Marijuana Fight," the President made a significant statement on a number of topics, including marijuana enforcement, while signing the latest spending bill. Here are the details:

President Donald Trump signaled he may ignore a congressional ban on interfering with state medical marijuana laws, arguing in a lengthy statement that he isn’t legally bound by a series of limits lawmakers imposed on him.

Trump issued the “signing statement” Friday after he signed a measure funding the government for the remainder of the federal fiscal year, reprising a controversial tactic former presidents George W. Bush and Barack Obama used while in office.  Trump also suggested he may ignore gender and racial preferences in some government programs as well as congressional requirements for advance notice before taking a range of foreign policy and military actions....

In the signing statement, Trump singled out a provision in the spending bill that says funds cannot be used to block states from implementing medical marijuana laws.  “I will treat this provision consistently with my constitutional responsibility to take care that the laws be faithfully executed,” he said.

Tim Shaw, a senior policy analyst at the Bipartisan Policy Center, said that the president is bound by the language in the spending bill that now bears his signature.  “Part of the argument here in this signing statement is that he has the constitutional requirement to execute the law,” Shaw said in an interview.  “But this is one of those laws, and Congress has the ultimate authority over funds getting spent.”

Because the language used in this signing statement is somewhat boilerplate, I am disinclined to view this development as a direct announcement or even an indirect signal of any new firm policy of the Trump Administration in the arena of marijuana reform.  Still, given that the President has said almost nothing about marijuana reform since his election and given that some members of his Cabinet are clearly not fans of the marijuana reform movement, this statement provides more evidence that Prez Trump and others within the White House are not eager to be active cheerleaders for state marijuana reform efforts.

When was the last time that a medical cannabis related company was seized by the Federal Government that was not directly touching the plant? Ex. for example a package company