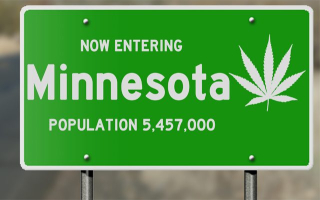 The study comes from the Minnesota Department of Health and is titled "Minnesota Medical Cannabis Program: Patient Experiences from the First Program Year."  The complete report is due to to be released next month, but this Executive Summary was released this week and includes these passages:

Between July 1, 2015 and June 30, 2016 a total of 1660 patients enrolled in the program and 577 health care practitioners registered themselves in order to certify that patients have a medical condition that qualifies them for the program. The most common qualifying conditions were severe and persistent muscle spasms (43%), cancer (28%), and seizures (20%). Each of the remaining six qualifying conditions during the first year – Crohn’s Disease, Terminal illness, HIV/AIDS, Tourette Syndrome, glaucoma, and ALS – accounted for less than 10% of patients. Ten percent (167 patients) were certified for more than one qualifying condition. Most patients were middle-aged (56% between ages 36-64), 11% were <18, and 11% were ≥65. Distribution by race/ethnicity generally matched the state’s demographics, with 90% of patients describing themselves as white....

Information on patient benefits comes from the Patient Self-Evaluations (PSE) completed by patients prior to each medical cannabis purchase and from patient and health care practitioner surveys. Results of analysis of PSE and survey data indicate perceptions of a high degree of benefit for most patients....

Moderate to severe levels of non-disease-specific symptoms such as fatigue, anxiety, and sleep difficulties were common across all the medical conditions. And the reductions in these symptoms was often quite large. These findings support the understanding that some of the benefit perceived by patients is expressed as improved quality of life.