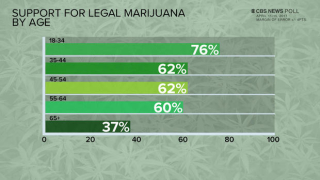 This new CBS News item, headlined "Support for marijuana legalization at all-time high," reports on a notable new CBS News poll about marijuana policy and reform.  Here are some details:

Sixty-one percent of Americans think marijuana use should be legal, a five-point increase from last year and the highest percentage ever recorded in this poll.  Eighty-eight percent favor medical marijuana use.

Seventy-one percent oppose the federal government’s efforts to stop marijuana sales and its use in states that have legalized it, including opposition from most Republicans, Democrats, and independents.

More generally on the topic of drug abuse, 69 percent think that should be treated as an addiction and mental health problem rather than a criminal offense.

The belief that pot should be legal has reached a new high in CBS News polls. Sixty-one percent of Americans now say the it should be, a five-point increase from a year ago. This sentiment has increased each year we’ve measured it since 2013, with the turning point to majority support coming in 2014. Back in 1979, this poll found just 27 percent saying it should be legal.

Those over 65 are the most opposed to legalization, but most under age 65 support it. And women are now as much in favor of legal marijuana as men are; in previous years they were less so.

Generally, most Americans think habitual drug use should be treated as an addiction problem rather than a criminal offense.  Even most Americans who oppose legalizing marijuana think so. Majorities of Republicans, Democrats, and independents all agree. Most Americans view marijuana in particular as safer than alcohol....

Support for legalization has risen among all age groups – particularly those under 55.  Americans under 35 show the strongest support.  Three in four adults between 18 and 34 support legal marijuana use, as do six in 10 Americans between 35 and 64.  Seniors remain the one age group for whom a majority still think marijuana use should be against the law.

I think especially interesting and notable are the breakdown in these numbers by party affiliation detailed here. Specifically, I find it quite interesting that, according to this poll, Republicans disfavor marijuana legalization by a slight margin (49% to 46%), they still overwhelming support medical marijuana access (87% to 11%) and significantly oppose the federal government taking action to stop marijuana sales in legalization states (63% to 33%). These numbers suggest that any strong Trump Administration push against state legalization efforts will likely engender some backlash among supporters as well as opponents of the President.

scheduling cannabis with heroin, strychnine, etc
is wrong - not just morally - but technically,
actually, wrong and false.. like scheduling
chocolate as a narcotic supertoxin
because so many use/abuse it..
this is the key to it all..