"Drug-Impaired Driving: A Guide for States" 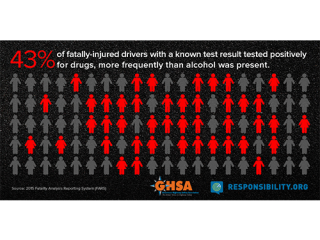 This report, originally released in September 2015, was prepared by Dr. James Hedlund under contract with the Governors Highway Safety Association (GHSA), the national association of state and territorial highway safety offices that address behavioral highway-safety issues, including drugimpaired driving.  An open forum on drugged driving at GHSA’s 2014 Annual Meeting noted the need for this type of resource.  Funding was provided by the Foundation for Advancing Alcohol Responsibility (Responsibility.org).

This revision, also prepared by Dr. Hedlund, updated the report to April 2017.  It includes 34 additional citations, drug-impaired driving data from 2015, state laws as of April 2017, and 15 state programs.

The report was guided by an advisory panel of experts from the states, the research community, and several organizations concerned with impaired driving.  It provides references to research and position papers, especially papers that summarize the research on drugs and driving that have appeared in the last 20 years.  It includes information obtained by GHSA from a survey of state highway safety offices. It does not attempt to be a complete review of the extensive information available on drugs and driving.

Drug-impaired driving is an increasingly critical issue for states and state highway safety offices. In 2015, the most recent year for which data are available, NHTSA’s Fatality Analysis Reporting System (FARS) reported that drugs were present in 43% of the fatally-injured drivers with a known test result, more frequently than alcohol was present (FARS, 2016).  NHTSA’s 2013–2014 roadside survey found drugs in 22% of all drivers both on weekend nights and on weekday days (Berning et al., 2015).

In particular, marijuana use is increasing.  As of April 2017, marijuana may be used for medical purposes in 29 states and the District of Columbia (NCSL, 2017a).  The most recent is West Virginia, which authorized medical marijuana in April 2017, with use to begin in July 2019.  Recreational use is allowed in Alaska, California, Colorado, Maine, Massachusetts, Nevada, Oregon, Washington and the District of Columbia and 13 other states have decriminalized possession of small amounts of marijuana (NCSL, 2016). Congress identified drug-impaired driving as a priority in the Fixing America’s Surface Transportation (FAST) Act of 2015 (https://www.fhwa.dot.gov/fastact/).   This multi-year highway bill directed NHTSA to develop education campaigns to increase public awareness about the dangers associated with drugged driving.   The Act also required the Department of Transportation to study the relationship between marijuana use and driving impairment and to identify effective methods to detect marijuana-impaired drivers.  Legislatures, law enforcement, and highway safety offices in many states are urged to “do something” about drug-impaired driving, but what to do is far from clear.