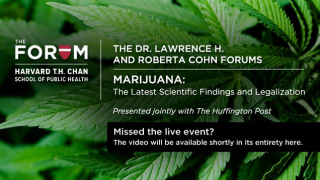 Though other commitments prevented me from watching the event live, I am grateful to have been able to find (and find the time) to watch an hour-long panel discussion on marijuana research and reform today as part of The Dr. Lawrence H. and Roberta Cohn Forums as The Harvard T.H. Chan School of Public Health.  I watched the full video via this page at The Huffington Post, which provides this "preview":

Twenty-eight states and the nation’s capital allow for the legal use of medical marijuana.  The drug is legal for recreational use in eight states and Washington, D.C. But with a new administration in office signaling a crackdown on recreational use, including an attorney general personally opposed to the drug, states are gearing up for a marijuana war.

While medical marijuana has been scientifically proved to ease pain, but the jury is still out on the drug’s other health benefits. A recent study conducted by the National Academies of Sciences, Engineering and Medicine, led by Harvard T.H. Chan School of Public Health professor Marie McCormick, found as much.  Ryan Grim, Washington bureau chief for The Huffington Post, will be joined by McCormick and other policy and research experts for a panel discussion on marijuana’s health benefits and legalization.

This page at the Harvard School of Public Health indicates that the video will be posted there soon as well, and it provides this additional summary of the event:

California, Massachusetts, Maine, and Nevada became the latest states to legalize recreational marijuana, bringing to 28 the number of states that have okayed the drug for medicinal use, recreational use, or both. Even more states have rules that allow certain kinds of cannabis extracts to be used for medical purposes. At the same time that state legalization is increasing, the Trump administration is signaling that it may ramp up enforcement of federal drug laws, even when they come into conflict with state laws allowing recreational marijuana use. State and local governments may find themselves on uncertain legal ground. Meanwhile, policymakers navigating this new landscape are also working largely without the benefit of a solid foundation of scientific evidence on the drug’s risks and benefits. In fact, a new National Academy of Medicine report describes notable gaps in scientific data on the short- and long-term health effects of marijuana. What do we know about the health impacts of marijuana, and what do we still need to learn? This Forum brought together researchers studying marijuana’s health impacts with policymakers who are working to implement new laws in ways that will benefit and protect public health.