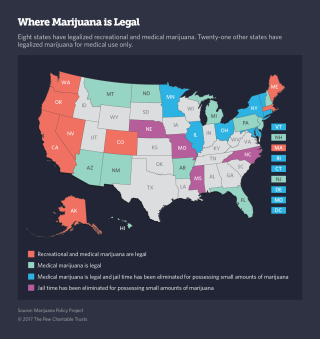 A busy week prevented me from finding time earlier to blog about this notable Stateline piece headlined "As More Voters Legalize Marijuana, States Left With Regulatory Hurdles."  Here are some highlights:

The battle to legally grow, sell, buy and smoke pot in California has been a long one. Voters in the state ushered in medical marijuana 20 years ago, but took until last fall to approve a plan to legalize and regulate recreational marijuana.

Now, California officials are faced with setting rules for a product that has been outlawed by the federal government since the 1930s — a challenge that lawmakers and regulators in the other states that chose some form of marijuana legalization in the November election also are confronting.

Like California, Maine, Massachusetts and Nevada voted to legalize recreational marijuana. They also will need rules about where pot shops can be located and whether dispensaries can sell food and candy infused with marijuana. They will also have to dovetail their recreational regulations with an existing medical marijuana industry, while Arkansas, Florida and North Dakota will be building medical systems from the ground up.

It could take several years. Colorado and Washington paved the way for recreational marijuana by legalizing it in 2012, but they are still sorting out policy details.

There is often a gap between the language of ballot measures like California’s and the detailed regulations needed to get marijuana markets off the ground. And the referendums that voters approve often call for quick implementation, giving legislators and regulators little or no time to enact policies before the drug becomes legal. “There’s no perfect implementation, there’s no perfect legalization effort,” said Michael Correia, a federal lobbyist for the National Cannabis Industry Association. “There’s going to be hiccups.”...

Arkansas and Massachusetts already are discovering the difficulty of setting up a regulatory system. Arkansas has delayed the launch of its medical marijuana program to give public agencies more time to prepare and lawmakers have introduced bills to restrict how the drug is used. Massachusetts lawmakers delayed the opening of marijuana shops by six months and proposed bills that would limit how much can be grown and possessed.

States also face banking challenges, licensing skirmishes and drugged driving debates. But despite all the difficulties, more states are expected to jump into the legalization fray. Already this year, at least 12 states are considering legislation to legalize and regulate marijuana. Another seven are looking at measures to decriminalize simple possession of marijuana and nearly 30 ballot measures related to marijuana are being considered for elections in 2017 and 2018....

Three years after marijuana could first be bought and sold in Colorado, officials are still working through regulatory changes. This year already, bills have been introduced that would create a licensing system for marijuana smoking clubs, prohibit advertising marijuana without a sales license, and allow the use of medical marijuana for stress disorders.

Similarly in Washington, which legalized marijuana on the ballot in 2012, lawmakers are considering legislation that would allow retailers to sell marijuana merchandise like clothing that bears a store’s logo, regulate in-home marijuana production, and standardize the packaging and labeling of edible marijuana products....

One test of how well legalized marijuana is working will be when California, with about 39 million people and the sixth largest economy in the world, opens its recreational marijuana shops. Market researchers estimate that the California cannabis market will grow by 18.5 percent annually over the next five years, reaching $6.5 billion by 2020. By comparison, revenue in Massachusetts and Nevada, which also legalized recreational marijuana in November, is expected to be about $1.07 billion and $629.5 million, respectively.

But regulating the California market won’t be easy. Already there are rumblings of pushing implementation back a year from 2018 to 2019. And it won’t be entirely up to the state. Local governments will have a lot of say in determining when and where marijuana is bought and consumed.