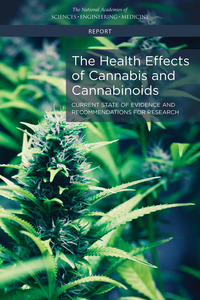 I am very pleased to see that today, just in time for a long weekend, the National Academies of Sciences, Engineering, and Medicine has produced this massive new report titled "The Health Effects of Cannabis and Cannabinoids: The Current State of Evidence and Recommendations for Research."  The nearly 400-page report is available for download from this website, and here its the website's brief account of the report's coverage:

In one of the most comprehensive studies of recent research on the health effects of recreational and therapeutic cannabis use, a new report from the National Academies of Sciences, Engineering, and Medicine offers a rigorous review of relevant scientific research published since 1999. This report summarizes the current state of evidence regarding what is known about the health impacts of cannabis and cannabis-derived products, including effects related to therapeutic uses of cannabis and potential health risks related to certain cancers, diseases, mental health disorders, and injuries. Areas in need of additional research and current barriers to conducting cannabis research are also covered in this comprehensive report.

Helpfully, this new Business Insider article provides some of the substantive highlights of this important new report under the headline "11 key findings from one of the most comprehensive reports ever on the health effects of marijuana."  Here are excerpts from this press account:

A massive report released today by the National Academies of Sciences, Engineering, and Medicine gives one of the most comprehensive looks — and certainly the most up-to-date — at exactly what we know about the science of cannabis.  The committee behind the report, representing top universities around the country, considered more than 10,000 studies for its analysis, from which it was able to draw nearly 100 conclusions.

In large part, the report reveals how much we still have to learn, but it's still surprising to see how much we know about certain health effects of cannabis.  This summation was sorely needed, as is more research on the topic.... Before we dive into the findings, there are two quick things to keep in mind.

First, the language in the report is designed to say exactly how much we know — and don't know — about a certain effect. Terms like "conclusive evidence" mean we have enough data to make a firm conclusion; terms like "limited evidence" mean there's still significant uncertainty, even if there are good studies supporting an idea; and different degrees of certainty fall between these levels.  For many things, there's still insufficient data to really say anything positive or negative about cannabis.

Second, context is important. Many of these findings are meant as summations of fact, not endorsements or condemnations. For example, the report found evidence that driving while high increased the risk of an accident. But the report also notes that certain studies have found lower crash rates after the introduction of medical cannabis to an area. It's possible that cannabis makes driving more dangerous and that the number of crashes could decrease after introduction if people take proper precautions.

We'll work on providing context to these findings over the next few days but wanted to share some of the initial findings first. With that in mind, here are some of the most striking findings from the report:

• There was conclusive or substantial evidence (the most definitive levels) that cannabis or cannabinoids, found in the marijuana plant, can be an effective treatment for chronic pain, according to the report, which is "by far the most common" reason people request medical marijuana. With similar certainty, they found that cannabis can help treat muscle spasms related to multiple sclerosis and can help prevent or treat nausea and vomiting associated with chemotherapy.

• The authors found evidence that suggested that marijuana increased the risk of a driving crash.

• They also found evidence that in states with legal access to marijuana, children were more likely to accidentally consume cannabis.

We've looked at these numbers before and seen that the overall increases in risk are small — one study found that the rate of overall accidental ingestion among children went from 1.2 per 100,000 two years before legalization to 2.3 per 100,000 two years after legalization. There's still a far higher chance parents call poison control because of kids eating crayons or diaper cream, but it's still important to know that some increased risk could exist.

• Perhaps surprisingly, the authors found moderate evidence (a pretty decent level of certainty and an indication that good data exists) that cannabis was not connected to any increased risk of the lung cancers or head and neck cancers associated with smoking. However, they did find some limited evidence suggesting that chronic or frequent users may have higher rates of a certain type of testicular cancer.

• There was substantial evidence that regular marijuana smokers are more likely to experience chronic bronchitis and that stopping smoking was likely to improve these conditions. There's not enough evidence to say that that cannabis does or doesn't increase the risk for respiratory conditions like asthma.

• There was limited evidence that smoking marijuana could have some anti-inflammatory effects.

• Substantial evidence suggests a link between prenatal cannabis exposure (when a pregnant woman uses marijuana) and lower birth weight, and there was limited evidence suggesting that this use could increase pregnancy complications and increase the risk that a baby would have to spend time in the neonatal intensive care unit.

• Limited evidence showed a connection between cannabis use and impaired academic achievement, something that has been shown to be especially true for people who begin smoking regularly during adolescence (which has also been shown to increase the risk for problematic use).

• One of the most interesting and perhaps most important conclusions of the report is that far more research on cannabis is needed. Importantly, in most cases, saying cannabis was connected to an increased risk doesn't mean marijuana use caused that risk.

And it's hard to conduct research on marijuana right now. The report says that's largely because of regulatory barriers, including marijuana's Schedule I classification by the Drug Enforcement Administration and the fact that researchers often can't access the same sorts of marijuana that people actually use. Even in states where it's legal to buy marijuana, federal regulations prevent researchers from using that same product.

Without the research, it's hard to say how policymakers should best support legalization efforts — to say how educational programs or mental health institutions should adapt to support any changes, for example. "If I had one wish, it would be that the policymakers really sat down with scientists and mental health practitioners" as they enact any of these new policies, Krista Lisdahl, an associate professor of psychology and director of the Brain Imaging and Neuropsychology Lab at the University of Wisconsin at Milwaukee, told Business Insider in an interview shortly before we could review this report.

It's important to know what works, what doesn't, and what needs to be studied more. This report does a lot to show what we've learned in recent years, but it also shows just how much more we need to learn.

This study is a refreshing articulation of the therapeutic and adverse effects of cannabis, cannabinoids, and THC. I worry, however, that until we understand how various strains of marijuana affect individuals, studies like this will lead to unsubstantiated generalizations. This study is restricted to “effects attributable to THC.” However, a narrow examination of THC alone, should not be used to make conclusory statements about the results of marijuana on the body. Regardless, this research is certainly a welcome asset, and opens the door for more modern studies to examine how THC properties change across marijuana strands and intake methods.

I am disappointed in this left wing, biased organization's report. They fail to discuss the dose-response curve. In excess, water is lethal. In tiny doses, the world's most powerful poison is therapeutic, botulinum toxin. The same curve applies to alcohol, tobacco, and radiation. Radiation prevents cancer in small doses, in an effect called hormesis.

Anyone claiming a benefit or harm from any substance or remedy should be forced to specify the dose. Otherwise the claim is misleading.