"Can medical marijuana be used to treat heroin addiction?" 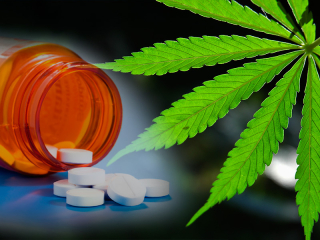 The question in the title of this post is one that I wonder about a lot as more and more communities struggle for responses to the opioid epidemic.  The question is also the title of this new local article from New Hampshire, which discusses a legislative hearing about addiction and other conditions being added to the state's list of qualifying conditions for medical marijuana.  Here are excerpts:

In the midst of a heroin and fentanyl crisis, New Hampshire lawmakers are considering a bill that would add opioid addiction to the list of qualifying conditions for the state’s therapeutic cannabis program.

That bill was one of five that could add chronic pain, opioid addiction, post-traumatic stress disorder, fibromyalgia and myelitis disorder to the list of conditions that qualify someone to use therapeutic cannabis in the state. New Hampshire lawmakers heard testimony on the bills Wednesday morning.

A number of patients testified in favor of the bills, but one doctor told legislators to proceed with caution on the bill that would allow doctors to treat drug addiction with marijuana.

Dr. Molly Rossignol, a family physician and addiction doctor at Concord Hospital, said there is not enough research to suggest cannabis is an effective treatment for addiction. “We’re going down a dark and potentially dangerous road,” Rossignol said. “In the past year, I’ve evaluated over 100 patients in our capital region. It is clear cannabis is not helping them stop or reduce their use of opioids.”

State health officials in Maine considered the question of whether to add addiction as a qualifying condition last year, but ultimately their Department of Health and Human Services concluded there was not enough research or evidence to show it would be effective.

“Given the lack of rigorous human studies on the use of marijuana for the treatment of opioid addiction (only one clinical trial has been completed) and the lack of any safety or efficacy data, the Committee can not conclude that the use of medical marijuana for treatment of opioid addiction is safe,” wrote Dr. Siiri Bennett, the Maine state epidemiologist, and Dr. Christopher Pezzullo, the state health officer.

Rossignol said the issue of marijuana being used to treat addiction needed more time. “This has to be vetted, it has to be scientifically studied,” she said.

Rossignol said her experience with addicted patients has so far indicated marijuana is not helpful with addiction. She treats her addicted patients with Suboxone, a drug taken daily to keep cravings and withdrawal symptoms at bay. Suboxone, methadone and naltrexone are the three drugs approved by the Food and Drug Administration to treat addiction – Rossignol said when used with evidence-based therapies, many studies show they help with addiction.

She said she believed marijuana could do the opposite. “It is something that I see every day reducing their chances of getting into longterm recovery,” she said. “I think it is a very slippery slope.”

Several patients traveled to the State House to testify in favor of the five cannabis bills, including ones to add chronic pain and PTSD to the list of qualifying conditions. Stephen Boulter of North Conway told lawmakers that therapeutic cannabis had dramatically decreased his pain and increased his quality of life.

Boulter was able to qualify for medical marijuana due to a vertebrae injury. He said pain from that injury became debilitating. “It’s with you 24 hours a day, you always have pain,” he said. “The only thing that mitigated the pain were opiates, which I detested.”

When Boulter qualified for medical marijuana, he found it got rid of his pain and didn’t make him loopy. “It made a tremendous difference, it allows me to go to bed at night and go to sleep,” he said. “I firmly believe that anyone suffering with severe chronic pain working with a qualified provider can restore a normal, high quality standard of living.”

Former state Rep. Joe LaChance of Manchester, a disabled veteran, encouraged lawmakers to add PTSD to the list of qualifying conditions. “This is so important to us,” LaChance said. “This is near and dear to my heart.” LaChance briefly described his struggles with drugs and alcohol, crediting therapeutic cannabis with his recovery. “Cannabis saved my life,” he said. “The VA got me addicted to opioids. Add a bottle of Jack Daniels to that, I’m lucky to be here.”