"The Case for Pot in the Age of Opioids: Legalizing medical marijuana could save lives that may otherwise be lost to opioid addiction." 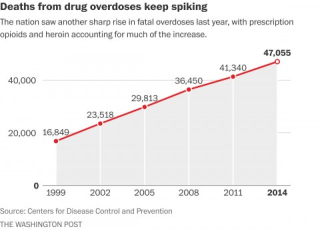 The title of this post is the headline of this U.S. News & World Report commentary on a topic that I hope continues to get more and more attention. Here is how the piece gets started (with links from the original):

As states embrace pot, the federal government should follow suit and move toward legalizing medical marijuana nationwide to help save lives. In states where medical marijuana is legal, fewer lives are lost to opioid overdoses. Save lives by legally smoking weed? Yes.

Those in favor of marijuana legalization for medical use have strong evidence to support that marijuana is a useful treatment for many diseases. These include the treatment ofseizures, chronic pain and supportive care for those enduring cancer treatment.

Just as important, opioid overdose deaths dropped by approximately 25 percent in states that passed medical marijuana laws, compared to states that have not, according to Johns Hopkins' Center for Mental Health and Addiction Policy Research. That's something we can't overlook.

Legalizing medical marijuana probably will save lives that would otherwise be lost to opioid abuse and addiction. And as more states move to legalize recreational marijuana, providing even greater access to the drug, one could argue opioid use may drop more.

The states clearly understand that marijuana has medical benefits. Now, we need to look beyond the states to change laws on a national level. Failing to do so will end lives that we likely could save. Most notably, marijuana needs to be removed from Schedule 1, so that it can be prescribed and researched more thoroughly.