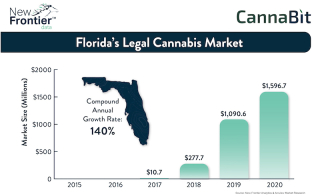 In the run-up to the November 2016 election, I suggested that Florida's vote over a significant medical marijuana ballot initiative could be as important as any of the recreational marijuana reform votes taking place in other states.  This new Forbes article, headlined "Florida Medical Marijuana Sales Could Rival Colorado By 2020," reinforces my view.  Here are excerpts (with links from the original):

Colorado and California may be ground zero for medical marijuana, but Florida could quickly catch up.  A new report from New Frontier Data with market data provided by Arcview Market Research projects that Florida's market will grow to $1.6 billion by 2020 at a compound annual growth rate of 140%. That would make it half the size of California's projected $2.6 billion market and top the projected $1.5 billion medical marijuana market for Colorado.

Florida voters legalized medical marijuana during this past election with more than 70% of the vote.  Florida has the fifth-highest median age and is one of the most popular places to retire in the country.  It is considered to be well-positioned to serve the aging population with medical cannabis products.  The New Frontier report believes that Florida could end up becoming 7.5% of the total legal U.S. cannabis market and 14% of the medical marijuana market by 2020.

“Florida has the potential to be one of the largest medical markets in the country. The state is home to the nation's largest percentage of people 65 and older, a demographic for whom chronic pain and catastrophic illnesses are commonplace and expensive to treat. Amendment 2 gives this large patient pool access to legal cannabis as an alternative therapy to their diverse medical needs,” said New Frontier Data Founder & CEO Giadha DeCarcer.

Troy Dayton of The Arcview Group said, “The opportunity for good jobs, tax money and wealth creation created by Amendment 2 passing cannot be understated. And, thankfully, seriously ill patients will no longer need to go to high school parking lots or drug dealers to get their medicine.” Dayton also noted that cannabis entrepreneurs are pretty excited at their prospects in the state.

One example of this is the decision by High There!, a social media site that caters to the cannabis crowd, to move from Colorado to Florida.  “When we launched 18 months ago, we felt Denver was the right city to be home to High There!, as it was a legal state.  But with Florida legalizing medical marijuana, we realized the opportunity was really in our home state, and High There! could be a model of the economic impact a legal marijuana market can bring to a region,” said co-founder and Chief Executive Officer Darren Roberts.

High There! is bringing jobs with it as it moves its headquarters back to the founders home state. The company plans to add positions in operations, and marketing in the coming months, and continues to add strategic partners as the company solidifies itself as a leading technology platform for the cannabis community. The company wants to promote accessibility of medical marijuana and has partnered with United For Care, the largest organization that worked to pass Amendment 2....

Other business opportunities include advanced delivery services for homebound patients. However, there are still some remaining hurdles.  Local jurisdictions could limit sales and there could be some barriers to doctors who want to participate. Plus, there is uncertainty surrounding the new Federal administration. Still, it's full steam ahead for medical marijuana in Florida unless someone says otherwise.