"Marijuana Is Harder Than Ever for Younger Teens to Find" 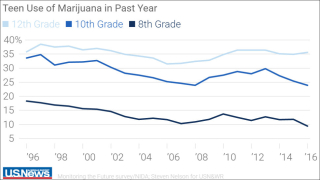 The title of this post is the headline of this lengthy new US News & World Report article.  Here are excerpts:

American voters and legislatures increasingly are allowing medical and adult recreational use of marijuana, but as home-growing spreads and retail stores open, younger teens are reporting the scarcest availability in at least 24 years.

Explanations remain theoretical for the surprising trend in the face of widespread liberalization of cannabis laws. But it appears clear that fears about children finding the drug easier to acquire have not become a national reality, at least not yet.

In 2016, 8th-grade and 10th-grade respondents to the large Monitoring the Future survey gave the lowest-ever indication that marijuana was easy to get if they wanted it, a question posed to the groups every year since 1992. Only 34.6 percent of 8th-grade students said it would be easy to get marijuana, down 2.4 percentage points. Of 10th graders, 64 percent said it would be easy to get, also the lowest rate ever, though not a statistically significant annual drop.

High school seniors, asked the question every year since 1975, reported greater accessibility with 81 percent saying it would be easy to acquire, a non-significant increase from 2015, which saw that age group’s lowest-ever rate.

Actual use of the drug dropped among 8th grade students and stagnated among 12th graders. Reported annual use continued a five-year slide among 10th grade students, though the year-to-year change was not statistically significant.

“I don’t have an explanation. This is somewhat surprising,” says Dr. Nora Volkow, director of the National Institute on Drug Abuse, which commissions the annual survey. “We had predicted based on the changes in legalization, culture in the U.S. as well as decreasing perceptions among teenagers that marijuana was harmful that [accessibility and use] would go up. But it hasn’t gone up,” she says.

“We’re seeing that more people in the U.S. except for teenagers are taking it," Volkow says. "The rates of increases are highest among young adults 18-24, so one would expect that would translate to the adolescents, but apparently it has not.”...

Volkow says explanations for long-term trends in use and accessibility are unproven, but that she is interested in hypotheses that include a connection to similar declines in alcohol and tobacco use, or the fact that teens spend more time around computers and less time around friends who could offer them drugs. She says it also may be possible legalization has prevented the rates from plunging.

"Every time a state considers rolling back marijuana prohibition, opponents predict it will result in more teen use. Yet the data seems to tell a very different story," says Mason Tvert, a spokesman for the Marijuana Policy Project. "The best way to prevent teen marijuana use is education and regulation, not arresting responsible adult consumers and depriving sick people of medical marijuana."

Ethan Nadelmann, executive director of the pro-legalization Drug Policy Alliance, says he believes the results show there’s no connection between legal reforms benefiting adults and young people’s marijuana use, which he says is more driven by cultural influences. “That’s excellent news. It’s reassuring,” he says of the new survey results. “Marijuana legalization opponents typically try to use the argument that legalizing marijuana for adults will hurt kids. Even though it’s not a credible argument, the Monitoring the Future data suggest there’s no substance to that claim whatsoever.”

Nadelmann says some legalization supporters are likely to argue that regulation has made pot less accessible to teens, but he sees no clear evidence. He offers as one potential explanation a generational aversion to inhaling smoke, and says he also recalls a Dutch explanation for low cannabis consumption despite open sales in coffee shops. “We succeeded in making cannabis boring," he recalls being told. “Maybe marijuana use is becoming less and less a symbol of rebellion among teenagers,” he says.

But legalization foes are unlikely to throw in the towel. With President-elect Donald Trump's pick of a dogged legalization opponent to serve as attorney general, they are optimistic about the possibility of ending recreational pot markets, which opened with the Obama administration's permission despite federal law banning pot possession in almost all cases.

"This year's results should be a wake-up call to all of us," says former presidential drug policy adviser Kevin Sabet, leader of the national anti-legalization group Smart Approaches to Marijuana. "We are seeing heartening declines in the use of almost every category of drug -- legal or illegal -- except for marijuana," he says. "The policy environment of legalization, acceptance and commercialization is making marijuana the exception."