Is anyone studying how marijuana reforms are impacting criminal justice systems in non-reform jurisdictions? 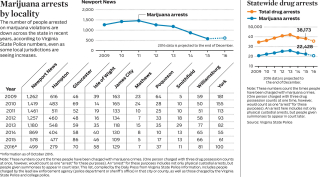 The question in the title of this post is prompted by this local article from Virginia headlined "Enforcement up in smoke? Marijuana arrests down sharply across state, region." Here are is how the article gets started:

Marijuana arrests are down significantly in Virginia over the past few years — leading some to speculate that the decline could reflect a loosening attitude in the Old Dominion about the drug.

The number of people arrested or charged with marijuana offenses has fallen by 14 percent statewide over a two-year stretch — from 25,981 in 2013 to 22,428 in 2015, according to Virginia State Police figures compiled from local law enforcement agencies.

That's the largest two-year drop in at least 15 years, with cannabis charges on pace to fall once again in 2016. "And it ain't because less people are smoking marijuana," said Ron Smith, a veteran criminal defense attorney in Hampton. "Virginia changes the law very gradually, and you can feel it happening. Even if they don't say, 'Hey, it's legal,' you can see that slow pull, that slow walk toward legalization." Within a few years, he said, marijuana possession laws could go the way of adultery laws: Still on the books, but not enforced.

Newport News has seen a far steeper decline than most localities, helping to drive the statewide reduction. In 2011, 1,461 people were arrested or charged on marijuana offenses in the city. But that dropped to 578 people in 2015 — a 60 percent decrease. Smith, for one, said he thinks police are being less aggressive these days on a variety of crimes, including marijuana offenses. "They're picking the apples that they can reach, but they're not standing on ladders," he said. "I'm not saying they're turning their heads, but they're not doing anything to look past what's right there in front of them."...

In one sign of the times, the top prosecutors in Hampton and Newport News decided in 2012 and 2013 to no longer prosecute adult misdemeanor pot possession cases, saying their resources were running thin for felony prosecutions. "We were wasting resources when we've got bigger fish to fry," said Hampton Commonwealth's Attorney Anton Bell, who said he wanted to increase focus on homicides and gun crimes.

Newport News' drop-off in marijuana arrests, in particular, appears to coincide with Newport News Commonwealth's Attorney Howard Gwynn's decision not to handle those cases. That left the prosecuting task to police officers — just as they handle their own traffic cases — before the cities filled the breach with alternatives. "Certainly locally here in Newport News, the absence of a prosecuting attorney to help the officers with marijuana charges has had a significant and adverse impact on the officers' ability to make those cases," Newport News Police Chief Richard Myers said. "And we know with certainty that that has contributed significantly with each passing year to the decrease in our marijuana cases."

When police officers find someone with marijuana on the street, Myers said, the extra burden of prosecuting the case "of course is going to factor into their decision-making" about whether to file pot charges or seek an alternative.... Myers, however, said his officers are not being told to "look the other way" on marijuana arrests. "We haven't done any stand-down kind of thing at all," he said. "Some folks on the street probably think we have because the arrests have dropped. And I have heard officers say that because of it, some folks are getting a little more brazen about it." But while the department places a priority on relationship building and "de-escalation," he said, "nowhere does that say that we're not making arrests, not writing tickets, that we're not being proactive."

After about a year of discussion with Gwynn's office, the city of Newport News about a month ago agreed to pay for two new prosecutors to handle marijuana cases, at a cost of about $60,000 per attorney annually, City Manager Jim Bourey said. Police officers began referring new pot cases to the prosecutor's office under the new system just last week. "We really think it's going to give the officers one more tool to kind of reel in any of that activity," Myers said. Perhaps in part because Hampton moved more quickly on this issue — hiring a lawyer with the city attorney's office to take over marijuana prosecutions in early 2015 — the decline of pot arrests in Hampton has been more modest. Hampton Police Chief Terry Sult said there's been no move to back off on enforcing marijuana laws.

"Absolutely not," Sult said. "As a matter of fact, our mission statement is prevention and then it's enforcement. And when we fail to prevent a crime, then we enforce the law, and I expect them to be professionally aggressive to enforce the law. ... I do believe in the broken windows theory, and in my view, marijuana is a gateway drug to harder problems. A lot of our violent crime is associated with marijuana and marijuana distribution, and I do think it's important that we enforce those laws — and we communicate that to our troops."