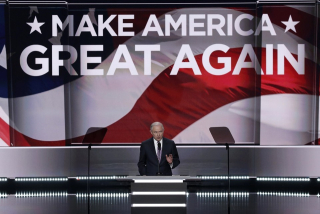 The title of this post is my (foolish?) reaction to this notable new Politico magazine article headlined "Jeff Sessions’ Coming War on Legal Marijuana: There’s little to stop the attorney general nominee from ignoring the will of millions of pro-pot voters." Here are excerpts from the start of the article which I follow with a (too brief) explanation for my blunt "bring it" bravado:

By nominating Senator Jefferson Beauregard Sessions III for attorney general, President-elect Donald J. Trump is about to put into the nation’s top law enforcement job a man with a long and antagonistic attitude toward marijuana. As a U.S. Attorney in Alabama in the 1980s, Sessions said he thought the KKK "were OK until I found out they smoked pot.” In April, he said, “Good people don't smoke marijuana,” and that it was a "very real danger" that is “not the kind of thing that ought to be legalized.” Sessions, who turns 70 on Christmas Eve, has called marijuana reform a "tragic mistake" and criticized FBI Director James Comey and Attorneys General Eric Holder and Loretta Lynch for not vigorously enforcing a the federal prohibition that President Obama has called “untenable over the long term.”  In a floor speech earlier this year, Senator Sessions said: "You can’t have the President of the United States of America talking about marijuana like it is no different than taking a drink… It is different….It is already causing a disturbance in the states that have made it legal.”

Sessions has not shared his plans on marijuana enforcement, but if he chooses, he will be able to act decisively and quickly — more so perhaps than with any other of his top agenda items such as re-doubling efforts to combat illegal immigration and relaxing oversight of local police forces and federal civil rights laws. With little more than the stroke of his own pen, the new attorney general will be able to arrest growers, retailers and users, defying the will of more than half the nation’s voters, including those in his own state who approved the use of CBD. Aggressive enforcement could cause chaos in a $6.7 billion industry that is already attracting major investment from Wall Street hedge funds and expected to hit $21.8 billion by 2020.

And so far, Congress has shown no interest in trying to stop the Sessions nomination, at least on this issue. Even members who are in favor of protecting states from federal interference on the marijuana issue have said they support Sessions’ confirmation as attorney general: “I strongly support Jeff Sessions as Attorney General,” said Representative Tom McClintock, Republican from California. “He is a strict constitutionalist who believes in the rule of law. I would expect that he will respect the prerogative of individual states to determine their own laws involving strictly intra-state commerce.”

There are dozens of reasons I think it would be quite foolish as a matter of constitutional law and sound federal policing priorities for future Attorney General Jeff Sessions to start his tenure by using broad federal police powers to criminally prosecute tens of thousands of players in a growing recreational marijuana industry.  This industry is already well-established and producing thousands of jobs and tens of millions in tax revenues in Colorado, Oregon and Washington; it is now gearing up for growth in Alaska, California, Massachusetts and Nevada and maybe Maine.

In the most simple of terms, it would be foolish for the Trump/Sessions Administration to try to "Make America Great Again" via tough federal pot prohibition enforcement because it would show to all who care to pay attention that the GOP's purported affinity for personal freedoms, free markets, limited government and states' rights is a huge bunch of hooey.  But I genuinely believe that most younger GOP Senators — e.g., folks like Ted Cruz, my wish pick for AG, Mike Lee, Rand Paul, Ben Sasse, Tim Scott— have always voiced a genuine commitment to personal freedoms, free markets, limited government and states' rights.  Consequently, I do not think these important GOP voices are going to be quick to bless any efforts by future AG Jefferson Beauregard Sessions III to bring back an era of national federal Prohibition enforcement by executive fiat.

Moreover, and completely missing from the facile analysis in this superficial Politico article, even if future AG Jeff Sessions were eager to bring back an era of national federal Prohibition enforcement by executive fiat for the emerging recreational marijuana industry, there will still be the bigger and stronger and much more consequential medical marijuana industry chugging along — especially in so many swing/red states that were critical to the election of Donald J. Trump circa 2016.  I am thinking here specifically of now-red states like Arizona and Florida and Michigan and Ohio and Pennsylvania.  Those now-red states alone add up to nearly 100 electoral votes that a whole bunch of Dems would love to win back in 2018 and 2020; and they are all states that, I think, could easily go back into the Dem column if/when establishment Dems finally figure out that medical marijuana reform in a winning issue worth promoting forcefully.  (I have blogged here an explanation for my claim in a post at my other blog that Voter math suggests a possible Hillary landslide IF she had championed marijuana reform.)

Importantly, in this post I have only outlined some obvious political/policy reasons for why I think it would be foolish (and ultimately unlikely) for future AG Jefferson Beauregard Sessions III to bring back an era of national federal pot Prohibition enforcement by executive fiat.  In a future post, assuming readers are interested, I can explain all the reasons I think the other two branches of the federal government — Congress and the federal judiciary — can and would and should find an array of means to "stop the attorney general nominee from ignoring the will of millions of pro-pot voters."  Given that Congress and federal judges over the last eight years have done a whole lot to preclude the Obama Administration from doing too much by executive fiat,  everyone concerned about criminal justice and marijuana policy in the Trumpian future much keep in mind that the Framers gave us a wonderful federal system of check-and-balances that has been pretty effective at keeping the big bad federal government from doing too many stupid things that are obviously against the considered will of the people.