The title of this post comes from this CBSNews.com article addressing the question looming over the otherwise positive 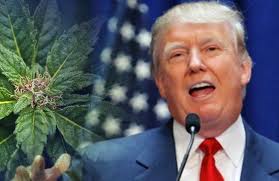 Supporters of the marijuana industry should be celebrating this week’s passage of eight state ballot measures to permit its use by adults. That promises to triple the industry’s size in coming years.

But harshing their buzz are several key allies of President-elect Donald Trump, such as his running mate Mike Pence, who are skeptical about the benefits of marijuana legalization.

Not surprisingly, many in the cannabis industry had expected Democrat Hillary Clinton to cruise to victory and were stunned when it didn’t happen. Now, they’re awaiting signals of how Trump will approach cannabis, even as the industry is set to expand significantly.

“If Hillary Clinton had won, this would have been the grand slam that everyone in the industry had been hoping and praying for for years,” said Chris Walsh, editorial director of Marijuana Business Daily. “With Trump coming in, no one knows what’s going to happen. There are a lot of fears that he might crack down on the industry.”

During the campaign, Trump argued that marijuana legalization should be decided on a state-by-state basis, without being more specific. But in addition to the vice president-elect, some of Trump’s closest advisers, such as New Jersey Governor Chris Christie and former New York City Mayor Rudolph Giuliani, are no “friends of marijuana reform,” according to the Drug Policy Alliance.

Lawmakers in Indiana failed to reach an agreement on a medical marijuana bill during their 2016 session, and according to the Marijuana Policy Project, the state has among the most draconian cannabis laws in the country.

In New Jersey, Christie signed a law allowing medical use of pot last year, but activists have criticized it for being overly restrictive. The governor is adamantly opposed to allowing recreational pot use. Giuliani reportedly has argued that marijuana is a gateway drug that could lead to abuse of more harmful substances like heroin, a view that many experts dispute.

Hope Hicks, a spokeswoman for the Trump campaign, didn’t respond to a request seeking comment...

It would be difficult for the Trump administration to get rid of legal marijuana given the windfall the states have earned in tax revenue, according to [Nick] Kovacevich[, the CEO of Kush Bottles].