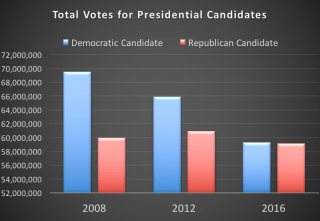 As various folks continue to try to figure out just what happened on Election Day 2016, I am seeing a lot of people noting that Hillary Clinton won more of the popular vote than did Donald Trump.  But Trump is now Prez-Elect because he squeaked out state-by-state victories in a majority of the swing states.  As the title of this post trumpets, I think simple math suggests the most of the swing states would have swung the other way if HRC had been a vocal and consistent advocate for major marijuana reform.  Here is the basis for my thinking:

1. Third-party candidates Gary Johnson and Jill Stein both advocated for full marijuana legalization, and I think it fair to imagine that some (significant?) percentage of their voters would have voted for HRC instead if she championed major marijuana reform.

If only half of voters who picked Johnson/Stein would have instead voted for HRC had she championed marijuana reform, HRC would have won, instead of lost, the states of Florida, Michigan, Pennsylvania and Wisconsin. Those states add up to 75 electoral votes and would have given HRC the presidency with more than 300 electoral votes. Given that younger persons disproportionately support full marijuana legalization (nearly 80%) and that younger voters disproportionately voted for Johnson/Stein, I think significant advocacy for major marijuana reform could have allowed HRC to secure many of these third-party voters in 2016.

2.  In addition to securing more of those who showed up to vote for a third party, I think significant advocacy for major marijuana reform could have allowed HRC to motivate many more traditional democrats to turn out to vote. This UPROXX article, headlined "It Appears As Though Hillary Clinton Was Ultimately Done In By Low Democratic Voter Turnout," details why lower turn out among democratic voters was fundamental to her surprising loss.  (Given that HRC mostly made arguments about who to vote against (Trump) rather than arguments about why to come out to vote for her (what did she promise to do exactly?), it is not hard to understand why she struggled to encourage her traditional base to show up and vote.

If HRC advocacy for major marijuana reforms motivate just another 10% of traditional democratic voters to show up to vote for her, she now wins Florida, Michigan, Pennsylvania and Wisconsin big AND now also wins Arizona, North Carolina, Georgia and maybe even makes Ohio and Texas(!) remarkably close.  With just the first additional three of these states added to her column, and HRC has now more than 350 electoral votes; throw in Ohio and Texas and she is way over 400.

Now I realize, of course, that one probably needs to be smoking something to really believe that potent advocacy for major marijuana reforms would have turned the US deep blue and led to a landslide outcome not seen since the Reagan era. But throughout the election season and now in this period of post-mortems, I keep returning the my own feeling that HRC really provided no tangible reason for me to vote for her rather than just against the other guy. Potent advocacy for major marijuana reforms, I suspect, would have given a lot of people other than me a real reason to vote for HRC.

She probably calculated that there would be a net negative effect from those voters opposed to legalization. I also suspect, based on my anecdotal experience with millenials, that they would have viewed her position as less than sincere.

1. Do you really think anyone who ultimately voted for HRC (or Johnson/Stein) would have been driven to vote for Trump if she championed legalization?

2. Trump proved sincerity is not really a critical political virtue if one develops a strong and useful policy proposal and allows it to be a signal to certain types of voters. Notable, Michigan and Ohio have recently had full legalization campaigns that energized a lot of marijuana activists AND both Ohio and PA have new medical marijuana legislation developing. HRC could have talked about the encouraging economic development and tax revenue developments in Colorado and other states to make a case that she would support and promote at the federal level sensing reforms to MJ prohibition to ensure the developing industry is focused on job creation and tax revenue to go to infrastructure projects. I think lots of folks drawn to Trump's tax talk would actually like the idea of raising taxes on "pot heads."