The title of this post comes from this BBC.com article, which states in part:

Chris Horlacher is president of Jade Maple, a consulting agency in the cannabis industry and one of the founding members of the Cannabis Growers of Canada (CGC). They represent small- and medium-sized entrepreneurs trying to establish 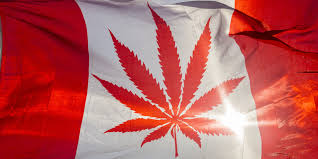 He says there is frustration and fear that the federal government will simply allow already established legal medical marijuana suppliers to take over the recreational marketplace.

"The government has created this brand new camp that is trying to gain its share of the market and they don't necessarily understand the product, the culture," Mr Horlacher says.

"We have all these people who are actually newcomers who don't have any experience with the product and now they're saying: 'We're the legitimate ones and you're the evil profiteers.'"

Medical marijuana is legal in Canada but, since 2014, registered patients can only get their cannabis shipped from licensed large-scale suppliers. They have also recently been allowed to grow their own.

There are currently 36 licensed growers in Canada. Many are openly positioning for the eventual legal recreational market.

Canadians, especially its youth, are among the world's biggest pot users.

Ottawa says legal pot under a new "strict regulation" regime will make it easier to keep it away from young people, to pull profits from organised crime, to reduce the burden on police and the justice system, and to improve public health.

A federal legalisation task force is wrapping up its work and is expected to send its recommendations to the government soon.