"AG pick Sessions should moderate his approach to marijuana"

Trump's selection of Sen. Jeff Sessions (R-AL) as the next attorney general has drug policy reform advocates worried. Sessions proudly supports the drug war, which includes hostility to marijuana and the people who use it. Earlier this year he said that 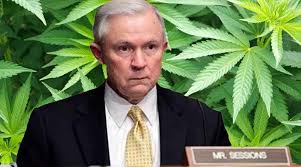 "good people don't smoke marijuana." In this recent editorial, The O.C. Register makes the case that Sen. Sessions needs to get with it, writing in part:

Recent public opinion polls have shown a majority of Americans support legalization, including polls conducted by Gallup and Pew Research finding 60 percent and 57 percent in support, respectively. An additional Gallup poll reported 13 percent of American adults identify as current marijuana users — bad people, according to Sessions — and 43 percent of adults have tried marijuana in their lifetimes.

While concerns over the abuse of marijuana, or any substance for that matter, are perfectly valid, it is clear that growing numbers of Americans are no longer convinced that prohibition and criminalization are justifiable approaches to the issue.

Under the Obama administration, the Department of Justice has effectively taken a hands-off approach, allowing states to try their own approaches to marijuana policy. But marijuana remains a Schedule I drug, illegal under federal law for medicinal or recreational use and distribution.

Going on his record and past statements, the prospects of a hands-off approach to marijuana under a Sessions-led DOJ seem dim. “We need grown-ups in charge in Washington saying marijuana is not the kind of thing that ought to be legalized, it ought to be minimized, that it is in fact a very real danger,” said Sessions at a hearing in April.

If there’s any room for optimism, it comes from statements made by Donald Trump throughout his campaign. “In terms of marijuana and legalization, I think that should be a state issue, state-by-state,” he said to The Washington Post last year. He later told Bill O’Reilly that he is “a hundred percent” in support of medical marijuana.

We completely agree with these stances from Trump. Allowing states greater freedom to experiment with differing approaches to complex problems is often desirable, and this is certainly the case with respect to marijuana.

Ideally, Congress should consider removing marijuana from the federal drug scheduling system entirely to remove any ambiguity about the legal status of marijuana. Short of that, a continuation of the current hands-off policy from the DOJ makes more sense than going against the wishes of the vast majority of Americans.