"Why marijuana opposition is so effective in liberal Mass."

On November 8, five states will consider legalizing recreational marijuana use--Arizona, California, Nevada, Massachusetts and Maine. While polls show majorities favor legalization in each state, the opposition has perhaps had the most success in a surprising place--Massachusetts. Joel Warner examines the battle over legalization there in this lengthy piece in The Boston Globe, writing in part: 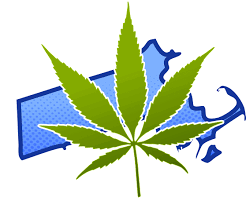 Massachusetts may have seemed like a legalization shoo-in, but that’s not how things have been working out. After several early 2016 polls showed the pro side with a considerable lead, polls in May and July suggested a majority of voters opposed legalization and, until recently, online betting markets gave Question 4 less chance of winning than nearly all marijuana measures being tracked nationwide. While surveys over the past two months have given Question 4 a better shot at victory, don’t count out the opposition just yet. Massachusetts-born casino magnate Sheldon Adelson, a staunch marijuana opponent, recently donated $1 million to fight passage of Question 4...

Around the United States, dozens of efforts to pass pro-marijuana initiatives have faced opposition from elected officials. But only in Massachusetts has a group of a state’s top brass joined together, across party lines, to formally oppose a legalization campaign.

The legalization campaign, which had until then enjoyed a year of favorable polling, took a big hit almost immediately. In April, one poll had voters supporting legalization by a 57 to 35 percent margin. But a month later, a Suffolk University/Boston Globe poll reported respondents opposing it 46 to 43 percent. Two months later, the opposition’s lead grew even wider: 51 to 41 percent.

Question 4’s sizable and unprecedented opposition could be in part happenstance, says Kris Krane, president of the Boston cannabis consulting and operations firm 4Front Ventures. “You have a governor who has very strong ties to the treatment community from his ties to health care,” he says. “And you have the mayor of Boston who is a recovering alcoholic and very anti-drug.” (4Front Ventures donates office space to the Yes on 4 campaign and has given it more than $35,000.)

Then there’s the state’s opioid crisis, which claimed more than 1,500 lives in 2015. Baker pledged to make combating addiction a top priority, working closely with Walsh and Healey last year to craft an opioid-control law — with a coalition in place to stop one kind of drug, the three then also opposed the legalization of another. “As we are addressing the opiate crisis, now is not the time to introduce an entirely new drug market,” says Corey Welford, spokesman for the campaign...

The Yes on 4 campaign argues that marijuana reform could actually help address the opioid epidemic. They point to studies that suggest that physicians prescribe fewer pain pills in states with legalized medical marijuana and that opioid overdose deaths are 25 percent lower in those locales. But when the state’s top officials and health experts link marijuana and opiate deaths, folks are bound to listen.

The legalization movement’s first response to its formidable opposition didn’t help. In Colorado, marijuana advocates made hay from the fact that Governor John Hickenlooper had once cofounded a brewery. The day after Walsh and Baker launched their campaign, the MPP-backed Yes on 4 team tried a similar approach, unveiling a sign depicting the two officials — who had supported additional Boston liquor licenses and longer bar operating hours — saying, “Our health policy: Drink more alcohol!” In the face of widespread criticism, particularly in light of  Walsh’s status as a recovering alcoholic, Luzier and Borghesani quickly apologized and scrapped the sign.

It was a hint that the MPP’s top-down approach to legalization campaigns might not work amid the deeply personal politics of Massachusetts...

Along the way, Massachusetts legalizers might have lost their ability to fully leverage one of their big arguments: that cannabis should be treated like booze. Originally, their initiative was titled the Campaign to Regulate Marijuana Like Alcohol, as similar MPP-backed efforts are called in Maine, Nevada, and Arizona. But by August, the Massachusetts campaign was known simply as Yes on 4.

Daunting adversaries aren’t the legalization campaign’s only problem. There’s also the lack of unified support from those who are supposedly on its side...

Even medical-marijuana advocates are struggling with Question 4. The Massachusetts Patient Advocacy Alliance, which supports the 36,000-plus medical-marijuana patients statewide, is remaining neutral. That’s partly because the organization doesn’t want to jeopardize its relationships with public health officials, says the Alliance’s executive director Nichole Snow. But it’s also because in other states recreational marijuana has had a way of eclipsing patient needs. “The marijuana industry has great potential for crowding out advocacy groups,” Snow says. “Business interests are going to outnumber the patients. I have already seen it happen.”

Earlier this year, Washington state shut down nearly all its roughly 1,500 medical dispensaries, forcing most medical marijuana patients to buy their cannabis, at a slightly discounted price, from recreational shops. Even if Massachusetts didn’t go the same route after legalization, market forces could have the same effect. Legalization “slows the growth of medical markets,” a recent analysis by a cannabis investor network concluded. But though that’s bad for medical marijuana investors, it can be good for consumers, who benefit from falling prices and broader selection amid the competition.

Despite these obstacles to legalization, the likelihood that Bay Staters will be free to legally light up in the near future is good. Recent polls show a majority of likely voters support legalization in the state; according to one poll, support for legalization has grown from 50 percent in September to 55 percent this month, increasing the polling advantage for the question's supporters from 5 to 15 percent.