The question in the title of this post comes from this local article reporting that state lawmakers in New Jersey plan to push to legalize recreational marijuana use in 2018. Current Gov. Chris Chris Christie has been a vocal opponent of marijuana legalization, but term limits prevent him from retaining the office. Preparing for a more marijuana-friendly environment in Trenton after Christie's gone, several state lawmakers to a trip to Colorado to see how legalization has been working out; and, according to the article, they were impressed: 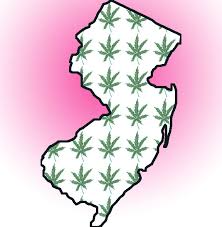 Legalized marijuana could be "a game-changer" for New Jersey's economy, Senate President Stephen Sweeney said Thursday, declaring his intent to help change the law as soon as the next governor takes office in 2018.

Fresh off their trip to Colorado to see how the legal marijuana industry works, Sweeney and a group of state lawmakers told reporters Thursday they were impressed with how regulated, safe and profitable this new cash crop has been for the Rocky Mountain state.

The law won't change while Gov. Chris Christie remains in office. The Republican governor has vowed to veto a legalization bill, and has said he suspects that medical marijuana, legal since the day before he took office in 2010, is a back-door path to recreational pot. Christie's term expires in January 2018.

Sen. Nicholas Scutari (D-Union), who led the delegation to Denver and Boulder from Saturday to Wednesday, said recreational marijuana has created nearly 29,000 jobs, revitalized the economy of some struggling blue-collar towns and reduced the number of drug possession arrests by about 80 percent.

Colorado state officials have reported that $135 million in tax revenue was generated by the medical and recreational marijuana programs combined in 2015...

"And, the sky hasn't fallen," added Scutari, the sponsor of a bill legalizing cannabis sales and possession. "These are neighborhoods you would be proud to say you represented or lived in."

Sweeney, (D-Gloucester) may have been even more enthused about the trip, which included meetings with public health officials and lawmakers business owners, and visits to dispensaries and manufacturers.

"I was on board before we went, but I am absolutely sold that this industry can be regulated. It's safe, it's well managed. Colorado has done an amazing job," Sweeney said.

"This is a game changer for the state," he continued. "I'm committed to it. We are going to have a new governor in January 2018. As soon as the governor gets situated we are all here and we intend to move quickly on it."

Phil Murphy, the only Democrat who has announced he is running for governor next year, has publicly said he support marijuana legalization.

Scutari said when he introduces the marijuana legalization bill, he will look to merge the regulation of the recreation and existing medicinal program, which serves about 9,500 people, according to the state Health Department.

He would eliminate the sales tax on medicinal sales, noting that no other medicine is taxed. Scutari predicted once recreational marijuana is available, the exorbitant cost of an ounce of cannabis – about $500 – would drop. An ounce in Denver cost about $250, the lawmakers said.

Arizona, California, Maine, Massachusetts, and Nevada have legalization initiatives on the ballot this November, and polls show each of those initiatives is likely to pass. If that happens, more than a quarter of the country will live where it is legal to use marijuana recreationally, which experts expect will increase the pressure on the federal government to end marijuana prohibition. Still, after California, New Jersey would be the second most populous state to legalize recreational marijuana use, which would be a nice feather in the cap for legalization advocates at a time when interest in marijuana policy and politics is peaking nationally.