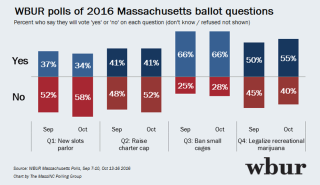 In part because all prominent political leaders throughout Massachusetts, both Democrats and Republicans, have come out strongly opposed to the state's marijuana reform initiative, I had come to expect that the state's ballot initiative would end up going down to defeat this fall.  But this new article, headlined "WBUR Poll: Support Increases For Legalizing Marijuana In Mass," suggests that politicians opposition to the initiative might be driving the public to support it more. Here are the details (with links from the original):

A new WBUR poll (topline, crosstabs) finds support for the legalization of marijuana is up among likely Massachusetts voters.  Fifty-five percent of likely voters now say they favor allowing adults to use recreational marijuana, which is the subject of Question 4 on the November ballot.

When WBUR last polled on legalizing marijuana, last month, the gap was narrower, with 50 percent in favor and 45 percent opposed. That 5-point gap has now grown to 15 points, with 55 percent in favor and 40 percent opposed.  "This one follows a long string of polls which shows the marijuana question with the 'yes' side leading by somewhere between the mid-single digits and the mid-double digits," said Steve Koczela, president of the MassINC Polling Group, which conducted the survey for WBUR.

James Carroll, of Hopkinton, is among those who favor legalizing marijuana.  "People should have a choice in what they do and don't do," he said. "Liquor's legal. It didn't use to be legal."

Koczela says there's particularly broad support for letting people use marijuana at home.  "We found that almost everybody would be OK with the idea of people using marijuana in their homes — 84 percent said no, that that would not bother them," Koczela said. "When you ask, though, about using marijuana in public, only a third said that that would be OK with them."  And 64 percent say it would bother them.

"I do have a concern about people taking it and then driving," said Carol Yankauskas, of Falmouth.

Most oppose advertising for marijuana in their community. Fifty-one percent of likely voters say it would bother them if marijuana businesses advertised in public places in their community.  Susan Brownstein, of Westhampton, on the other hand, said it's fine.  "We advertise alcohol," she pointed out. "We don't want our children to drink. We advertise Cialis, for goodness's sake, during prime-time, when little kids are watching television. This is way more benign."

There is, however, support for stores selling marijuana.  Fifty-nine percent of respondents say it would not bother them if a store selling recreational marijuana opened in their community.

Nearly half the respondents (49 percent) say they have tried marijuana.  Of those who have tried it, an overwhelming majority, 72 percent, support legalization.